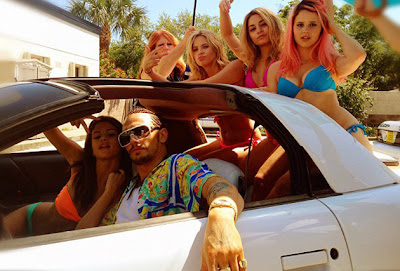 Actor's Federline-like makeover for movie, James Franco channels K-Fed in ‘Spring Breakers’ movie, James Franco sports gangsta cornrows and shades in the new film "Spring Breakers." Hey, James Franco: Kevin Federline called —- he wants his look back. The actor is seriously rocking a K-Fed vibe on the set of the controversial new movie from Harmony Korine ("Kids"), "Spring Breakers."
The image of the "Rise of the Planet of the Apes" actor shows him in a sweet ride sporting cornrows, a goatee, aviators, and a tropical shirt unbuttoned over a wife beater. Selena Gomez, the former Disney star, poses in a bikini next to Franco. The two look totally gangsta. The good girl playing bad tweeted the shot with the note: "This is where the trouble begins."
The transformation of Franco as a drug dealer in the movie makes him almost unrecognizable. In real life, he is a student at Yale and New York University, a poet, an author, and an Academy Award nominee for his performance in "127 Hours." K-Fed is a failed singer, Britney Spears ex, and a recent contestant on the Australian weight-loss show "Excess Baggage."
But now K-Fed can't even get full street cred for the law-breaking look —- even though he's lost 30 pounds and is looking like his former self. The rapper Riff Raff says the style is actually based on him. The blog Fuse sent him the photo, and he responded that he is the inspiration for Franco's bad-boy look: "Harmony called my phone to be in this new movie 'Spring Breakers.' I was out of the country." Riff Raff didn't make it into the movie, but his look did, he says.
The flick about a spring break gone bad, also starring Vanessa Hudgens and Rachel Korine, focuses on college students who commit robbery to fund a spring break trip. The young lawbreakers land in jail but are bailed out by a drug dealer, played by Franco, who wants to be repaid with some dirty work. The movie comes out in 2013.
via: yahoo
Posted by News Hump at 12:42