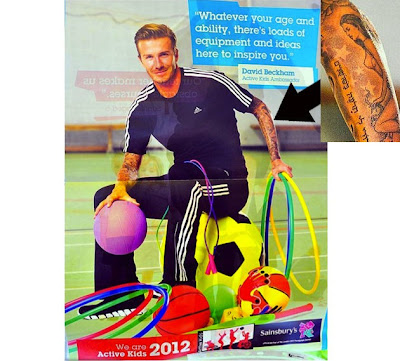 Huge dustup over David Beckham's tattoo, David Beckham’s Posh Spice tattoo draws complaints from UK schools, The soccer star has had the ink for four years, but now groups across Britain are complaining. Having a tattoo of the word 'Victoria' incorrectly spelled in Sanskrit clearly wasn't enough for David Beckham, so in 2008 he added to his ink collection with a lingerie-clad depiction of his wife on his left forearm.
Despite being clearly visible for the past four years — and essentially just an outline drawing of a woman in underwear — the tattoo is now at the center of a huge kerfuffle, as it features on a flyer distributed by UK supermarket chain Sainsburys to 47,000 schools and community groups. The Sun reports:
Pictures of Becks' tattoo of Victoria in lingerie on his arm appeared on promotional posters and collection boxes for the Sainsbury's Active Kids scheme.
Anita Deacon, of Winshill Pre-School in Burton, Staffordshire, said: "We're not being prudish.
"We just think it's inappropriate. The tattoo depicts Posh Spice wearing nothing but underwear and posing provocatively."
Pre-school manager Lynne Baker also complained, saying she would keep the offending material on display, but only if it was "too high up for the children to see". Thus completely defeating the object of posting it up.
Forgoing the irony of this news being reported in The Sun — a newspaper that features a full-page topless woman every single day — reacting in this manner to a tattoo on one of the most photographed men in the world seems a little over the top. Nevertheless, Sainsbury's has profusely apologized for the offense they may have caused.
If the supermarket wishes to re-distribute the flyer, perhaps they should consider my elegant solution to the problem...
via: yahoo
Posted by News Hump at 12:47