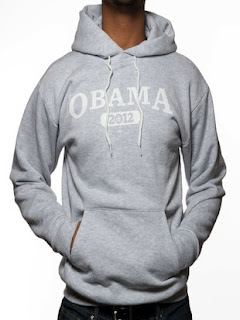 Obama re-election hoodie sale canceled, Obama campaign hoodies sale canceled after controversy, Conservatives say the president's campaign attempted to capitalize on the Trayvon Martin case. President Obama recently said that if he had a son, he'd look like murder victim Trayvon Martin. And in what some conservatives see as a direct connection between the national controversy surrounding the teen's death, the Obama 2012 re-election campaign announced via Twitter on Monday that it was putting its collegiate hooded sweatshirt on sale.
The sweatshirt was temporarily discounted to $40 from its regular $50 listing. However, the tweet announcing the sale has apparently been removed and following the hooded sweatshirt link at Obama's campaign re-election site store shows the clothing item listed at its regular $50 price.
Obama's critics on the right had a field day with the questionable Twitter posting, with the conservative blog Gateway Pundit calling it "disgusting," and the website Twitchy asking if "Team Obama is capitalizing on Treyvon Martin's death?"
Some of Obama's Republican presidential rivals offer hooded sweatshirts on their sites as well. You can buy a Mitt Romney "Believe in America" hoodie for $50, or a "Ron Paul Is My Homeboy" hoodie from the Texas congressman's PAC. The Rick Santorum and Newt Gingrich campaigns do not appear to have hooded sweatshirts for sale.
via: yahoo
Posted by News Hump at 16:21