Lady Gaga Wears Crown, No Pants for Her Birthday

Lady Gaga Wears Crown, No Pants for Her Birthday
Lady Gaga Wears Crown, No Pants for Her Birthday, Lady Gaga's vain birthday display, The singer steps out in an over-the-top accessory (and no pants) on her 26th birthday. Lady Gaga may have told Oprah Winfrey that she didn't "intend to speak to anyone for a very long time," but she's certainly commanding attention in other ways.
Her latest "look at me" moment occurred on Wednesday (her 26th birthday) — a mere 10 days after her comment to Winfrey — when the pop star stepped out in West Hollywood in a rhinestone-covered crown, studded motorcycle jacket … and no pants. Instead, Gaga, who also carried around a little dog in a white T-shirt, opted for a pair of black sheer tights over her brief-style panties. She even posted a photo of her kooky getup on Twitter, with a message to her more than 21 million followers: "I can be, the Queen that's inside of me. You guys are the best." 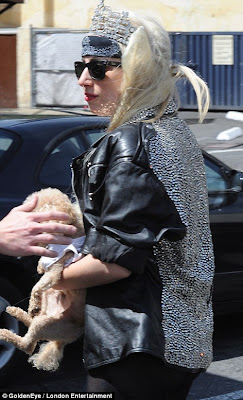 Whatever Gaga does, her Little Monsters revel in it. Although wearing a crown could be considered a bit vain (even for a celebrity), countless fans re-tweeted her photo, and even more left her loving comments telling their Mother Monster how beautiful she was and wishing her the happiest of birthdays. "Thank you for being in my life!," wrote one named @JemmaLovesGaga. "Your so special to me.
I love you so much happy birthday my queen!" Other Little Monsters tweeted original videos they made in honor of her big day. The "Born This Way" singer even tweeted one in particular that caught her eye. "This is so sweet!" she added to the post. "The best birthday present ever. I love little monsters so much. Thank you so being in my life!"
Ever since Gaga's March 18 interview with Winfrey, during which she revealed she was going to purposely retreat out of the public eye, she's really done anything but. Although she hasn't been constantly out and about, she has made her presence known via her Twitter account, where she tweets out messages and photos of herself practically every day.
Three hours before her March 28 birthday, Gaga uploaded a pic of a slice of her birthday cake, albeit smashed — and placed right next to a pricey Chanel purse. On Tuesday, she posted a photo of herself sans makeup, which of course made the rounds on nearly every entertainment website since it's such a rare occurrence to see the singer without her usual face paint.
Other tweets have focused on her exercise routines (yoga and cycling), jokes about her gay friends, and a plug to buy her ex-boyfriend Luc Carl's new book.
Get ready to see a lot more of Gaga when she kicks off her Born This Way Ball tour in Seoul, South Korea, on April 27.
via: yahoo
Posted by News Hump at 22:37