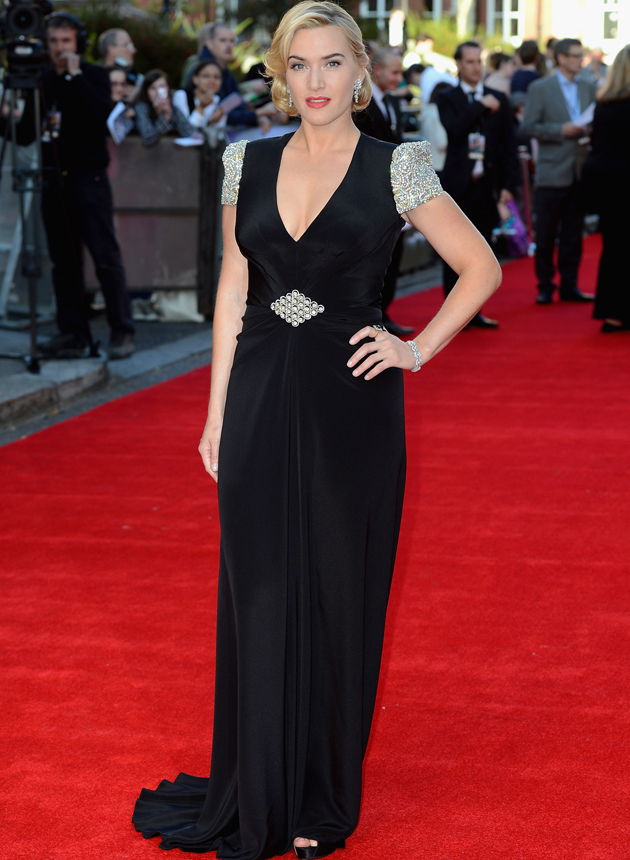 She was absent from the Hollywood event after her boyfriend at the time Stephen Tredre died from cancer. And she failed to turn up in London after contracting dysentery while filming 'Hideous Kinky' in Mexico.

But she made up for it on the red carpet last night at London's Royal Albert Hall - 15 years later - stealing the show in a cleavage-flashing long black gown.

Arriving with her current boyfriend (and Richard Branson's nephew) Ned Rocknroll, the actress wowed in the black dress with a plunging neckline balanced out with capped sleeves heavily embellished with silver beads.

Kate Winslet added yet more sophistication to her red carpet fashion with a 40s style hair do complete with large waves.

The look was completed with drop earrings and a matte shade of red lippy.

But although Kate worked the photographers with confidence as she walked the red rug, she revealed to Yahoo! omg! that she was cringing at the thought of seeing herself naked in 3D.

She told us she was "beside herself" at the idea of her flesh on the big screen.

Adding: "I'm not going to look, I'll be in the bar by that point. It's like being forced to go through a photo album of your former self for three and a half hours solidly."

She said: "I haven’t seen the whole film in a very long time but it’s a whole different me and we look much younger and our acting was different, hopefully not as good as now."

Much to the disappointment of fans, Leonardo DiCaprio did not join his former co-star at the premiere due to filming commitments.

Instead, the film's baddy Billy Zane was in attendance with his stunning brunette girlfriend Jasmina Hdaghaas.