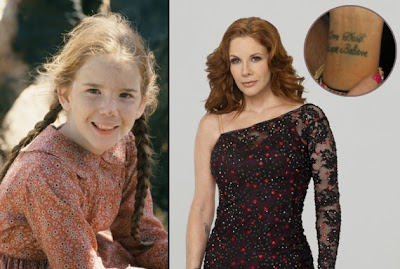 'Dancing' star's surprising body art, 'Dancing's' Melissa Gilbert Reveals The Inspirations Behind Her Tattoos, "Little House on the Prairie" alum Melissa Gilbert has ink you probably wouldn't expect. As the plucky Laura Ingalls on TV's "Little House on the Prairie," beginning in the mid-1970s, "Dancing with the Stars" Season 14 contender Melissa Gilbert epitomized girl power.
Playing "Half Pint," the tomboyish daughter of Charles (Michael Landon) and Caroline (Karen Grassle) Ingalls, she served as a model of independence for millions of young girls growing up across the country. And like the character she grew up playing, Melissa too, is a bit of a rebel.
She has a similar sense of devotion to her family as her iconic television character did (the actress' sons have already been spotted several times cheering mom on from the "DWTS" audience), but Melissa has a distinctive wild side all her own. Instead of rolling in the mud a la Laura with Nellie Oleson, Melissa is fantastically fit mom with a host of meaningful tattoos.
"I think I've always just been me. Even when I was playing Laura on 'Little House on the Prairie,' that wasn't me, that was just me in that dress. So inside me has always been the same person -- a little wild, a little rebellious, very analytical, very emotional and basically a happy person," Melissa told Access Hollywood on Tuesday following the "DWTS" results show, when asked about her ink.
And the 47-year-old actress revealed her seven tattoos all have deeply personal meanings.
"I have my father's initials tattooed on one part of my arm," she told Access on Monday night, referring to her late dad, actor Paul Gilbert, who passed away in 1975.
And in another spot, the actress, who played Laura for nearly a decade, has another family-inspired bit of ink.
"I have the family motto inside my wrist," she said. "Love. Trust. Hope. Believe."
The sentimental star said the tattoos are reminders of her history.
"It's such a long story for each of them... Going through difficult times, mourning the loss of my father a second time, actually, as an adult. And my family went through some tough stuff this year and I felt the need to put the motto on my arm," she said. (The actress filed for divorce from her husband of 16-years, Bruce Boxleitner, in late August 2011.)
Earlier this week, on "Dancing," Melissa and Maks took to the ballroom with a quickstep to "Dancing with Myself," a song from her ex-boyfriend, '80s rocker Billy Idol. Showing off her own rock 'n' roll streak, Melissa admitted she's can't help but be a fan of getting body ink. 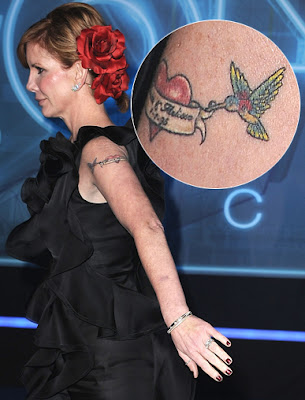 "There's a few everywhere. I like them," she said.
"They all have meaning. There's nothing frivolous tattooed on my body," she added.
Melissa's pal, actress Kirstie Alley (who danced with Maks in Season 12) had "Unbroken" tattooed insider her wrist during her own "DWTS" experience, but it's unlikely the ballroom bad boy will get a tribute on the redhead's body.
"I have seven. I think I have my quota," Melissa told Access, before slightly reconsidering.
"Maybe a big 'Maks' just across the back of my neck," she laughed.
"My face!" Maks suggested.
"'I Survived Maks,'" Melissa laughed.
Melissa and Maks return for to the ballroom on Monday's "Dancing with the Stars," at 8/7c on ABC.
via: yahoo
Posted by News Hump at 22:07