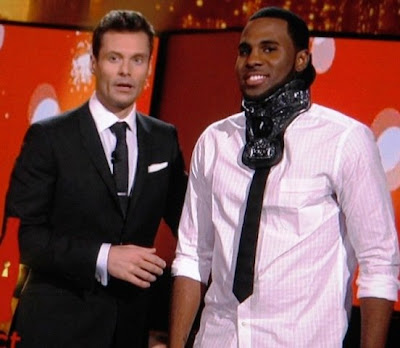 Singer Jason Derulo’s dons outlandish neck brace, Jason Derulo’s Bedazzled ‘Idol’ Neckbrace Explained, Jason Derulo found a creative way to stay in style after suffering an injury. Wednesday night on "American Idol," R&B-pop star Jason Derulo made a brief appearance, but viewers weren't chattering about the fact that he was sitting in the studio audience between soul legend Dionne Warwick and his relatively new girlfriend, Season 6 "Idol" winner Jordin Sparks. No, instead people were noticing Jason's outlandish new "accessory"--which looked like something Lady Gaga might wear, but was in fact a medical necessity, not a flashy fashion statement.
"This is not just an accessory--this is serious, isn't it?" asked a somewhat confused-looking Ryan Seacrest, as Jason appeared onstage Wednesday wearing a rhinestone-encrusted neckbrace. To this, Jason replied, "People ask me all the time, 'Oh, I like that, is that an accessory?' No, I actually broke my neck preparing for my tour."
Back in January, Jason snapped a vertebrae in his neck when he did a backflip during a tour rehearsal--a move he'd done countless times--and landed on his head. As a result, Jason postponed his entire tour, and had to wear a brace for at least three months. But he's making the most of it, using this as an opportunity to add some more bling to his wardrobe. His outlook is sparkling, both literally and figuratively, because this situation could have been much, much worse: According to a post Jason wrote on his official Facebook and Twitter pages two days after his accident, 95 percent of the victims of this sort of injury either die or become permanently paralyzed.
Speaking to The Hollywood Reporter backstage Wednesday night at "Idol" about his blingy brace, Jason said: "A French jeweler who lives in Paris...found out that my neck was broken and I had to wear this ugly thing around all the time. So we talked, and he was like, 'Why don't I make you a piece?' And he made me this. I gave him what I had in mind, and he came up with this. I thought it was the most beautiful thing I've ever seen. He turned the ugliest thing into the sexiest thing. It's all crystals. I have this one, and then I have the other medical one. I'm starting my own line--no, I'm just playing."
Jason went on "Idol" this week to announce his involvement in this season's "Perfect Harmony" songwriting contest, in which viewers can help him complete his new and unreleased song, "Undefeated," which is inspired by his injury. "The song is kind of explaining that in turmoil, in things that you go through, you don't have to be defeated. You can get up and accomplish anything," he said.
Jason will perform the finished version of "Undefeated" on the "Idol" finale the week of May 22. He won't still be rocking his fancy French neckbrace by then, but you have to admit that for now, he wears it well.
via: yahoo
Posted by News Hump at 16:28