Controversy over breastfeeding in public

Controversy over breastfeeding in public 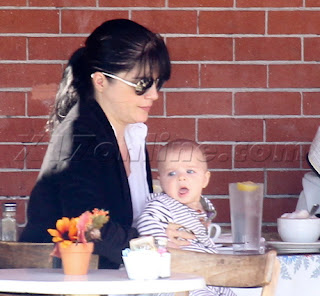 Controversy over breastfeeding in public, Selma Blair Breastfeeds in Public. Why You Shouldn't Be Offended, Actress and new mom Selma Blair reignites the debate by announcing, "I don't care if I offend." "Passerby be warned," begins a post on People.com. "When Selma Blair's 8-month-old son is hungry, the actress doesn't hesitate to breastfeed him, no matter the audience."

That opener alone sums up the thorny debate over public breastfeeding. It should seem simple enough to anyone who's had a baby or knows someone who's had a baby, that when a child needs to eat nothing else matters. Not table manners, not the roving eyes of strangers, and not the personal opinions of anyone but the newborn screaming for breast-milk . But for every mother publicly feeding her child, there's someone taking offense.
"We all have nipples," Blair, 39, tells People. "If I can't get a cover over me quick enough, so be it."
I am not a mother, but I know from those who are, that everything changes. Any residual body issues or shyness leftover from teenage years, takes a backseat to the needs of a newborn.
This is particularly obvious when female celebrities, who spend their careers fending off hackers, Hefners and Hollywood producers, to keep their private parts private, whip out their breast in a restaurant at the sound of their baby's cries.
It's not that nobody notices: when Beyonce recently nursed Blue Ivy, tableside in New York, it became the lead story in Time Magazine. Was she making a public statement about breastfeeding? Was she championing the public nursing movement? More likely, she was just feeding her baby to best of her ability in that moment. The world isn't made for breastfeeding moms.
"As a mother who breast-fed my three children when they were infants, I sympathize with any mom who has the inevitable awkward moment of trying to nurse in public without giving a sideshow," writes Michelle Henry, a Michigan mom of three, in a letter to her local paper. "I can testify there are very few public places for moms to breast-feed alone, in any sort of comfortable spot. Ever try nursing or holding an infant on a little tiny triangle bench in the corner of a department store dressing room?"
Henry's letter was a response to a recent incident wherein a Michigan judge told a mom of a two-month-old to stop breastfeeding in the courthouse. Despite it being totally legal, the judge said, "it's my courtroom, I decide what's appropriate in here."
If you ask Kim Kardashian, breastfeeding isn't appropriate at a restaurant either. "EWW I'm at lunch, the woman at the table next 2 me is breast feeding her baby with no cover-up then puts baby on the table and changes her diaper," she tweeted.
Like NASCAR Driver Kasey Kahne, who described a mom nursing her kid in a supermarket as "nasty", Kardashian isn't a mother. Most famous opponents of public breastfeeding aren't.
In recent years, moms trying their best to breastfeed discretely in public places have been booted from planes, restaurants and shopping centers. Then Facebook joined the "appropriate" police force.
After numerous complaints, the social networking giant removed breast-feeding photos from its site on the grounds that it's lewd content.
"There's no other way to look at it. We're being treated as pornographers," Emma Kwasnica, a breastfeeding educator protesting Facebook's decision, told a CBS affiliate. In fairness, the site is also home to multiple public breastfeeding advocate groups, like "respect the breast," launched by moms who are "tired of people lashing out at what is natural and what they believe is healthy for their children."
Breastfeeding in the first six months of a child's life is particularly crucial to the long-term health of a baby. Both the World Health Organization and the US Surgeon General have launched campaigns to encourage mothers who can breastfeed, to overcome both physical and logistic challenges and stick with it.
In the United States, mothers have the legal right to breastfeeding in public. But because of social backlash, some moms carry a copy of the law as protection where ever they go. Others have joined the "nurse-in" movement, organizing grassroots protests and rallying celebrities to champion on their behalf,
in effect, position the public breastfeeding issue on the front-lines of the women's rights movement.
Never underestimate the power of a hungry baby. And that's really what this fever-pitch debate is all about. When a newborn needs food, it's mother will feed it. That's not a choice, it's an instinct. As Blair puts it: "I don't care who I offend; my baby wants to eat."
via: yahoo
Posted by News Hump at 14:20