Fisherman reels in catch of a lifetime

Fisherman reels in catch of a lifetime 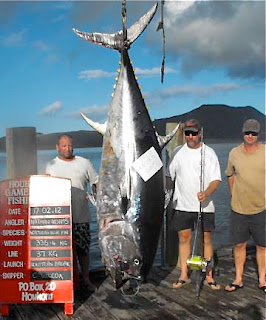 Fisherman reels in catch of a lifetime, Angler's 738-pound Pacific bluefin tuna may be biggest ever caught, An angler is waiting to hear back about a world record after making a huge catch off the New Zealand coast. A 738-pound Pacific bluefin tuna described by angler Nathan Adams as a "fish of a lifetime" may also be the largest Pacific bluefin ever landed on rod and reel.
The catch was made aboard an 18-foot boat during a recent competition off Houhora in New Zealand. If it's approved by the International Game Fish Assn., it will set an all-tackle world record, replacing a 716-pound 8-ounce Pacific bluefin landed off Westport, New Zealand, in 2007.
The IGFA typically takes weeks before deciding on record submissions, but since Adams was in a competition and presumably complied with strict tournament rules, there's a strong chance he'll become the record holder.
It was one of two incredible catches for Adams, a member of the Muriwai Sportfishing Club.
He also landed a 788-pound black marlin, to set a club record, and his group battled 12 billfish in 11 days as part of the New Zealand Sport Fishing Council Nationals competition. A 16-year-old girl accounted for five of those billfish.
Most of the fish were released, but the giant tuna and marlin were kept and will be sent to the taxidermist.
Adams, 42, told Auckland Now that he'd like to place the tuna on the wall of his home, replacing a 30-pound snapper, but his wife isn't sure she wants something so large as a wall decoration.
"She says it will be like mounting a sofa," Adams said.
via: yahoo
Posted by News Hump at 21:36