Mila Kunis opens up about romance

Mila Kunis opens up about romance 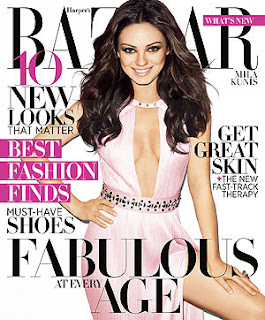 Mila Kunis opens up about romance, Mila Kunis: ‘I Don’t Get Asked Out’, The star's off-screen love life is a far cry from what her fans probably assume. Mila Kunis is arguably one of the hottest actresses in the world, but that doesn't mean guys are banging on her door asking for a date. After ending an eight-year relationship with Macauley Culkin in 2010, the "Friends With Benefits" star has been unattached — not that she's complaining.
"I honestly think being single's great," Kunis, 28, tells Harper's Bazaar in its April issue. But she's quick to add, "Being in a relationship's great [too]. It's all about the timing." But time is what she doesn't seem to have. The actress just wrapped a six-month shoot in Detroit filming "Oz the Great and Powerful" with James Franco and Michelle Williams (Kunis plays Theodora, the Wicked Witch of the West), and the time away really affected her dating life. "I don't get asked out," she says. "This past year, I haven't been home, so who's going to ask me?"
Until Mr. Right comes along, Kunis is content to hang out at home — by herself. "I prefer to stay home and have a nice little beverage and watch television," adds the actress, who works out with a trainer three days a week mostly so she can afford to eat and drink whatever she wants. "My glass of wine and I are besties." And she's not kidding. Just like with men, Kunis also has a hard time forging relationships with women. She admits she does not make friends easily. "It's hard to open up to people because often they're more curious than they actually care about you."
Although she's been famous since she landed on "That '70s Show" opposite Ashton Kutcher when she was just 14, Kunis says she enjoyed a fairly anonymous life until 2010 when "The Black Swan" was released. "I honestly thought, 'This is going to be a Darren Aronofsky movie. Maybe people will see it, maybe they won't.' I didn't for one second think, 'I'm making a movie about ballerinas. People are gonna run to see this.'"
But they did, thanks in large part to her and Natalie Portman's intimate scene — and their shockingly skinny ballerina-caliber physiques. Kunis herself dropped 20 pounds from her already lean frame. And while putting it back on wasn't a problem, the drastic weight loss and gain really messed up her body. "[It] has never been the same," she tells Harper's Bazaar. "My shape is different. When I got down to 95 pounds, I was muscles, like a little brick house, but skin and bones. When I gained it back, it went to completely different areas." Of course, it didn't go to places where she would actually want it to, like her butt or breasts. "I'd be happy if my ass got bigger," Kunis adds. "All the weight that left my chest went to my side hip, my stomach."
The change in her body is another reason Kunis works out three days a week, but she is also open to the idea of transforming her body with the help of a plastic surgeon's scalpel — just not now. "I will not put a needle in my body unless I have a medical reason," says the actress, "but ask me in 10 years. Right now, I'm like, 'I'm going to embrace it,' but ... I'm probably going to want to have something done. I have no doubt."
via: yahoo
Posted by News Hump at 21:27