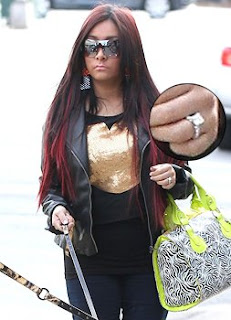 Snooki flashes engagement ring, Snooki’s Got a Ring: Photo Adds Fuel to Engagement Reports, A photo surfaces of the sizable rock fiancé Jionni LaValle bought the pregnant reality star. Snooki may not have publicly confirmed it, but her ring finger tells the tale: The rumored expecting “Jersey Shore” reality star Nicole “Snooki” Polizzi is showing off what looks to be a huge diamond engagement ring. The sparkler was on full display as the possibly pregnant celebrity headed to a pet store with her reality show co-star Jenni "J-Woww" Farley. Both People magazine and E! Online are reporting that Polizzi recently got engaged to the father-to-be, Jionni LaValle.
The star and MTV would not respond to the reports. The celeb has maintained silence on the latest rumors about her life, but she has made it clear that LaValle is The One. On January 12, she told People, "I know he's the one so I know the ring's gonna come soon... He knows it should be big, 'cause if it's small, I'm saying no. Like, 'Get another ring!'"
The two met in Seaside Heights in 2010 and have been dating ever since. "I'm in a stage," the pint-sized personality told People magazine at the time, "where I'm like, 'I want to marry you!'" Her quiet counterpart is studying to be a teacher. Sources claimed last week that the 24-year-old is about three months pregnant with LaValle's baby. Only weeks ago, Snooki publicly took to the airwaves to deny the initial pregnancy rumors, telling "Good Morning America," "I definitely do want kids, but I'm not pregnant." She has yet to confirm reports of her pregnancy or engagement.
LaValle was snapped helping his sweetheart move into her new Jersey City digs, where she will be shooting her spinoff show with fellow cast member Jenni “J-Woww” Farley. No telling what pregnancy and engagement will do for the future of the MTV spinoff show. MTV confirmed to the magazine that the two "moved into their new digs with animal print furniture in tow."
via: yahoo
Posted by News Hump at 21:19