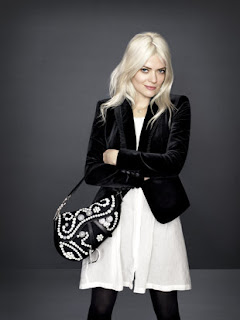 Meet Hollywood’s most powerful stylist, Kate Young: Hollywood’s most powerful stylist, You may not have heard of Kate Young, but if you've watched a recent awards show, you've seen her work. Stylists are often the unsung heroes of the fashion world. We study their work every time we flip through a magazine or watch an awards show red carpet, and yet we rarely know whose work it is we're looking at. Unlike designers, stylists seldom receive shout-outs in interviews or credits in photos.
So it's only fair that once a year, the Hollywood Reporter honours the fashion geniuses behind the celebrity looks we love in its annual ranking of Hollywood's Most Powerful Stylists.
This year, Kate Young ultimately came out the winner, reports the Huffington Post. Other top honourees included Toronto native Leslie Fremar, who styles Charlize Theron and Reese Witherspoon, and Petra Flannery, who styles Emma Stone and Mila Kunis.
Young, originally from Pennsylvania but now a Brooklyn girl through and through, whose fashion career began as Anna Wintour's assistant at Vogue, is a University of Oxford graduate, with degrees in English and art history. According to the Hollywood Reporter, she is also the only stylist represented by Creative Artists Agency (CAA), which her agent Mitch Grossbach attriubutes to her "fashion acumen, sophistication and taste, coupled with her humility and infectious personality, which all contribute to brilliant results."
"My first word was shoe," Young tells the Hollywood Reporter about her fashion path that started very early. "I kept saying, 'I want to go to FIT [Fashion Institute of Technology] and they'd all burst out laughing -- everyone in my family is a doctor, lawyer or professor. Of course, my family is incredible supportive of what I'm doing now."
Her earliest clients included Julianna Margulies and Jennifer Connelly, who she met through her job at Vogue and instantly impressed with her smart styling choices in magazine shoots. Young's most famous clients of late are Natalie Portman and, most recently, Michelle Williams. She was responsible for keeping Portman looking chic during awards season while she was pregnant and up for best actress for her Black Swan performance. Portman's beautifully draped blush-coloured Viktor & Rolf dress with the red rose detail at the Golden Globes? That was Young's handiwork. Williams' stunning and unexpected orangey-red Louis Vuitton silk-organza dress at this year's Oscars? Young, of course.
"When you see something and like it right away, it's usually too boring an hour later," she tells the Hollywood Reporter. "I want to push the envelope just far enough that you're not sure if you like it at first. I want people to initially say, 'Oh, that's an interesting choice,' and then hopefully say, 'Oh, but I really like it.'"
Regarding Williams' midnight blue, long-sleeved Jason Wu dress at this year's Golden Globes, Young tells the Hollywood Reporter: "In Hollywood, there's so much bright and tight at the Globes. I thought Michelle could be more subtle and refine, and that might get her a little attention."
In addition to her styling work with Hollywood's A-list actresses, Young also works as a consultant with designer Jason Wu year-round. Expect to see Young's work in fifth Dior ad campaign with Portman, which she just wrapped. Next on her to-do list is styling actress Rachel Weisz for her appearances surrounding the premiere of Deep Blue Sea.
via: yahoo
Posted by News Hump at 23:10