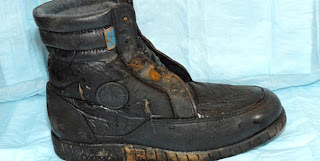 Grim Human Foot Mystery Solved, Coroner solves mystery of human feet found on beaches, 12 human feet, in shoes, have washed up on Washington state & British Columbia beaches, baffling authorities for five years. A coroner says he knows why. A grim mystery has been baffling Washington state and British Columbia, Canada: Why do all these disembodied human feet keep washing up on our beaches?
The appearance of 12 feet in rubber soled shoes in five years, with six surfacing in a six-month period, made officials worry that something fishy was afoot. Theories ranged from a serial killer to an aircraft crash. According to London's Daily Mail, British Columbia coroner Stephen Fonseca, who has been studying the phenomenon for years, says the source is a bridge over Vancouver's Fraser River, and most of the feet belonged to suicide victims. Thanks Stephen, now please take a vacation. So, beachcombers, that means there may be more feet washing up in the future. Tread carefully.
Posted by News Hump at 09:36