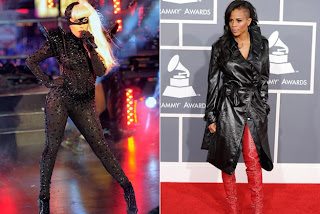 Ex-Creative Director: Gaga 'Got a Little Dark', Gaga's Former Creative Director Talks, Video: Laurieann Gibson explains why she split with Lady Gaga & is now helping Nicki Minaj execute her creative vision. Gaga's Former Creative Director Talks. Last fall, Lady Gaga and creative director Laurieann Gibson, with whom she co-directed the ‘Judas’ video, severed their professional ties. While Gibson was an essential member of the Haus of Gaga, it’s the Mother Monster’s operation and she calls the shots and runs things as she pleases. Gibson was diplomatic when she bowed out and for her part, Gaga hasn’t said much.
However, Gibson, a choreographer, spoke out a little more to ET Canada, saying that she bounced when things got dark, creatively speaking.
“Like any collaboration, when [Lady Gaga] got some ideas and wanted to grow in a different direction I was like, ‘You know what, go ahead,’” Gibson said about their mutual decision to go their separate ways. “I think it reached a point where I wanted to keep the brand that I helped build a little purer …No judgment, but it just got a little dark for me creatively.”
Gibson has quickly rebounded from her split with Gaga and has started working with Nicki Minaj, collaborating with the hip-hop queen on her controversial 2012 Grammy performance, which featured an exorcism onstage and ruffled the feathers of the religious right. From the frying pan into the fire, right? The chatter regarding the perf is not lost on Gibson, who offered, “If we put that much attention into helping each other instead of ridiculing a performance, maybe then we can really make some change.”
Laurieann Gibson certainly has a terrific resume, going from Gaga to Nicki. She must have the patience of the saint and surely knows how to handle divas with big personalities.
via: popcrush
Posted by News Hump at 14:50