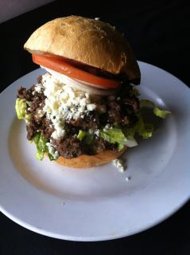 Rihanna-themed menu item sparks outrage, Rihanna And Chris Brown Incident Inspires ‘Caribbean Black And Bleu’ Sandwich, A steakhouse is under fire for its "black and bleu" burger inspired by Chris Brown's 2009 assault. Rihanna and Chris Brown's recent controversial "Birthday Cake" song now feels tame compared to another food-associated tie-in for the former couple.
On Friday, Chops & Hops restaurant in Watkinsville, Ga made the pop singers an item on its weekly celebrity-themed special of the day. Their burger is called the Caribbean Black and Bleu Sandwich. 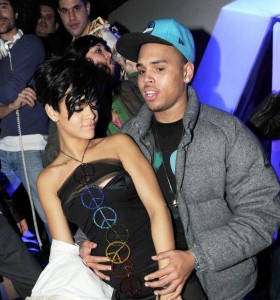 In a posting on the Chops & Hops Facebook and Twitter pages, executive chef and owner Richard Miley, makes a correlation to the sandwich and Brown's 2009 assault on Rihanna: "Chris Brown won't beat you up for eating this unless your name starts with a R and end with A."
The sandwich prompted coverage from major news outlets and received mixed reaction online.
Ricky Roberts said he was shocked by the promotion. "I really can't believe this," he wrote on Chops & Hops's Facebook page. "Making light of domestic violence to sell a damn sandwich!"
L. Antionette, however, found the joke funny. "Lol some restaurant made a burger after Chris Brown and Rihanna. Called the 'Caribbean Black & Bleu' cleverrrrrr," she wrote on her Twitter page.
Miley, who came up with the theme and made the postings on the company's social media pages, said he was just calling attention to Rihanna's troubles with Brown.
"I was just trying to shed light," he said in an exclusive interview with Yahoo! Music. "It happened and she's trying to get back with him? If they can talk about it and joke about it on late night television shows and make millions of dollars, I don't see why I can't; and I'm no comedian."
Since Miley began the promotion six weeks ago, he's created sandwiches named after Paula Deen, Snooki, Britney Spears, Pee-Wee Herman, and Whitney Houston. Each has had a controversial theme.
The Paula Deen sandwich, called Paula Deen's Type 2, made light of the famous chef's health issues and featured bacon, fried green tomato, pickled okra and deep fried honey butter. In the Facebook post, Miley joked that the sandwich could put you in a "diabetic coma."
The Britney Spears sandwich was called a Hot Mess Of A Celebrity. But the Whitney Houston sandwich was arguably most trite. The Whitney Houston was a grilled turkey sandwich on rye with raspberry chipotle barbecue sauce, spinach, tomato, ossau-iraty cheese, sea salt and powdered sugar.
While Miley stands by his decision to have fun with the menu, he now admits that the powdered sugar topping on the Houston sandwich was offensive.
"It wasn't the best choice that I made," he said. "But it was a good sandwich. We had people calling in for to go sandwiches. It should of been more complimentary of Whitney Houston."
Miley said the intent behind the celeb sandwiches was harmless and just a way to have fun. "I love food," he said.
The idea was conceived by Miley and his friend Todd Sturts, who writes food review blog, Tasting Tampa.
"I didn't see this coming," he said. "I did not expect the reaction."
via: yahoo
Posted by News Hump at 16:08