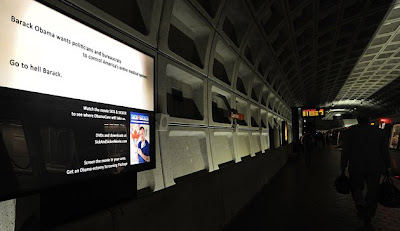 'Go to hell Barack': Row over Washington Metro ad, 'Go to hell Barack' ad ignites controversy, Critics call for the "deeply disrespectful" message to be yanked — but the D.C. Metro says it's free speech. In the heat of a US presidential election year, with Americans immune to the polarized and bitter nature of political discourse, it takes a lot to shock them, especially in Washington.
But one ad at a DC Metro station -- which starts off criticizing Obama's health care reforms and ends up telling the president to "go to hell" -- goes beyond the pale, says Jim Moran, a Democratic congressman from Virginia.
The advertisement is for "Sick and Sicker: When the Government Becomes Your Doctor," a documentary that interviews Canadian doctors and patients in the hope of showing how dangerous "Obamacare" is for the American people.
"Barack Obama wants politicians and bureaucrats to control America’s entire medical system. Go to hell Barack," the ad says.
Moran wrote a letter to Metro general manager Richard Sarles calling for the removal of the advertisement.
"The ad is deeply disrespectful of the President of the United States and does not belong in the Washington Metropolitan Area Transit Authority (WMATA) network," he wrote.
It turns out that such language is within the accepted limits of American law and such advertisements are protected under the First Amendment of the US constitution, guaranteeing free speech.
"WMATA advertising has been ruled by the courts as a public forum protected by the First Amendment of the Constitution, and we may not decline ads based on their political content," the Metro authority said in a written statement.
"WMATA does not endorse the advertising on our system, and ads do not reflect the position of the Authority."
Democrats have accused Republicans of lowering the tone of the political discourse in the United States during this election season, in particular with highly personal attacks on the president.
Arizona Governor Jan Brewer, a Republican, was widely condemned recently by Democrats for poking her finger at the president during an angry exchange on the tarmac after she greeted his arrival in Phoenix.
But conservatives argue that the treatment Obama gets is no worse than what liberals dished out to former president George W. Bush, especially in his second term after the US-led invasion of Iraq.
via: yahoo
Posted by News Hump at 09:10