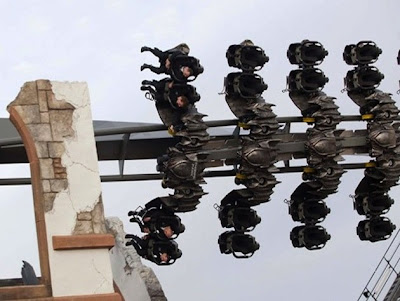 'Gut-wrenching' coaster set to debut, New winged roller coaster ‘the Swarm’ rips the arms off crash test dummies, The Swarm's turbulent ride has dismembered crash-test dummies in tests. A theme park in London is set to debut a powerful new winged roller coaster this month, but only after first figuring out how not to dismember its riders. Time reports that Thorpe Park has been conducting test runs of its new coaster, the Swarm, even enlisting fighter pilots who described the ride as "gut-wrenching."
The self-described "flight through apocalyptic devastation on Europe's tallest winged rollercoaster" propels up to 28 riders at a time with their arms and legs dangling freely at 62 miles per hour and includes trips through an inverted 127-foot drop and several close encounters with walled structures that are designed to make passengers feel like they are about to crash.
The ride's designers ran some test runs with crash test dummies, leaving many shocked when the dummies returned from the experience missing arms and legs. A team of former British fighter pilots were then brought in as the coaster's preparation neared completion. Mark Cutmore, team leader of the Blades, a stunt pilot organization, told the Metro: "I am a self-confessed adrenaline junkie, but even as a pilot used to G-force there were some gut-wrenching moments, and I have to admit the near miss element is eye-watering -- you really do feel as if you are going to crash into the structures."
via: yahoo
Posted by News Hump at 08:59