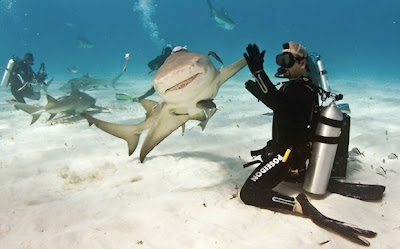 Scuba diver shares high-five with shark, Scuba diver gains notoriety for high-five greeting by large shark, A photo of a man's friendly encounter with a lemon shark he named "Taxi" becomes a Web hit. It may seem far-fetched that a person could develop a relationship with a wild shark, but Eli Martinez claims to have bonded with a lemon shark he has named Taxi, who is pictured in what looks to be a high-five greeting off the coast of the Bahamas.
"This shark is my buddy, I work with her a lot," says Martinez, who is editor of Shark Diver magazine. "Her name is Taxi, I named her that because of the entourage of remoras that follow her around. My work with her is almost like a dance, we just flow well together she is a total sweetheart."
The image has been making the rounds on the Internet since a story on Martinez appeared on British tabloid websites.
Martinez, 40, explained to the Daily Mail that he has encountered Taxi many times and of this particular dive he said, "She is very laid-back so I knew if I held my hand out she would come over."
Of the shark unexpectedly slapping his hand with its fin the veteran diver added, "Luckily my friend who owns an underwater camera captured it all on film for me to show the grand kids."
Lemon sharks, so-named because of the pale yellow-brown color of their skin, are found in subtropical waters and reach lengths of about 10 feet.
They're not known for being aggressive toward humans but have been implicated in sporadic attacks. One of the most recent involved well-known and controversial diver operator Jim Abernathy, who was bitten on the arm last year while on an expedition to the Bahamas.
via: grindtv
Posted by News Hump at 22:55