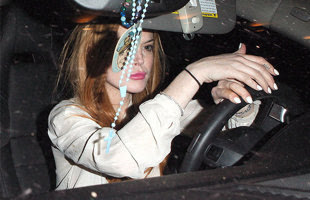 Lindsay Lohan caught in alleged hit-and-run, Lindsay Lohan hits pedestrian with car after partying, flees the scene, The starlet reportedly hits a pedestrian with her Porsche, then flees the scene before police arrive. Lindsay, Lindsay, Lindsay — when will you learn? Lohan struck a pedestrian with her Porsche Panamera just after midnight on Wednesday while attempting a three-point turn following a night of partying at Sayers Club in Hollywood. But instead of stopping to see if the man was injured, the 26-year-old hit the gas and fled the scene. A short while later, her car was photographed pulled over on the side of the road — but by the time police arrived, Lohan had switched places with her friend and was sitting in the passenger seat.
According to TMZ, the man whom Lohan struck, a manager at the nearby Hookah Lounge, initially told eyewitnesses he was not injured. But once someone explained to him who was behind the wheel — he had claimed he didn't know who the actress was because he's foreign — he complained of pain and sought treatment at a hospital before hiring an attorney. Although LAPD investigated the incident and declared there was no wrong doing, TMZ reports that all could change if the man files a police report.
That's very bad news for Lohan, who only has 14 days remaining on her probation — stemming from a 2007 DUI. If a case is opened and she is charged, Judge Stephanie Saunter could revoke her probation and send the actress back behind bars.
Naturally, Lohan is denying any culpability. "Scrape?" she wrote on Twitter the following day. "This is all a complete lie. I've been at community service. Last night, I attempted to wish a friend happy birthday, which I didn't even get to do because I was freaked out by all of the paparazzi. These false accusations are absurd."
Lohan doesn't have the best track record when it comes to driving. Not only was she convicted of two DUIs — one of which resulted in her driving her car up a curb — but she was also videotaped clipping a baby stroller while speeding around a corner in September 2010. Just like her recent hit-and-run incident, Lohan didn't stop for that one either. In addition, when she showed up at a friend's birthday party in Beverly Hills on Monday night, her $80,000 Porsche — which she just got in October — had substantial damage to its entire passenger side.
The early Wednesday morning incident also marked the second night in a row that Lohan was out partying — even though she proclaimed just weeks ago that she never does that anymore. During an interview with Matt Lauer on "Today" to promote her "Saturday Night Live" gig, Lohan claimed that partying "is not my thing anymore. I went out, actually, a few months ago with a friend. And I was so uncomfortable. Not because I felt tempted, just because it was just the same thing that it always was before. And it just wasn't fun for me. I've become more of a homebody."
Sure, Linds.
via: yahoo
Posted by News Hump at 12:17