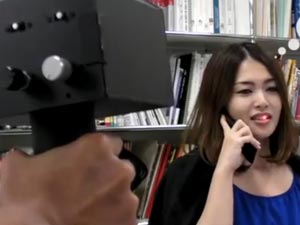 Japanese Develop Gun Device Shut Up, Japanese invent awesome device to shut people up, A pair of researchers in Japan have developed "SpeechJammer," a prototype "gun" designed to compel people to stop talking, without physically harming them. The "gun" is actually a directional speaker, combined with an input microphone, a motherboard, and software, all combined inside a small box that can be either fixed or used as a portable device. It uses what's known as delayed auditory feedback (DAF), essentially turning people's own voices against them in disconcerting fashion, to compel loudmouths to clam up.
The device was developed by Kazutaka Kurihara of the National Institute of Advanced Industrial Science and Technology in Japan, and Koji Tsukada of Ochanomizu University in Japan.
The problem that the researchers were trying to solve was a cultural one: in some cases, one person can simply overwhelm another, dominating a conversation through sheer volume and persisting when it is their turn to let others speak. The researchers did not note the tried-and-true method used at the Academy Awards, where music that gradually increases in volume is deployed to "play off" those with lengthy speeches. But they observed that in most social settings (train cars and libraries being among the exceptions), it is simply impolite to tell others to be quiet, even though their turn to speak has ended.
The SpeechJammer is predicated upon the principle that the humans are disconcerted by DAF, which "jams" speech when our own voices are played back to us, and slightly delayed. The effect is well-documented, the researchers said, and is related to stuttering.
"We utilized DAF to develop a device that can jam remote physically unimpaired people's speech whether they want it or not," Kurihara and Tsukada wrote.
The researchers tried out two prototypes, one fixed and another portable, each using some combination of a directed speaker that could be operated at a distance. Sounds entered the system via a direction-sensitive microphone, were delayed via the software, and the delayed speech was "shot" back at the speaker.
Did it work? The study found that the effect varied, depending on the volume of the speaker's voice and the gain of the input and output of the microphone/speaker assembly. The researchers tested two scenarios: a "spontaneous monologue," as well as a case where the reader read news aloud. In the latter case, SpeechJammer was more effective, although the researchers did not speculate as to why. The paper also found that SpeechJammer was ineffective at discouraging prolonged sounds, such as "Aaaaaahhhhhhh."
via: pcmag
Posted by News Hump at 22:48