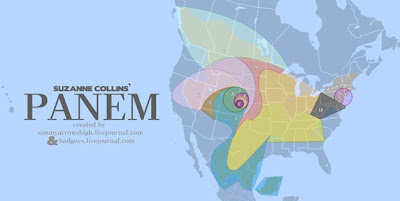 Fan creates incredible 'Hunger Games' map, If you need a "Hunger Games" fix, try mulling over what is very possibly the most detailed, best-thought-out map ever made of the post-apocalyptic nation known as Panem. Obviously, some creative license is involved ("I chose to center part of the cataclysm [that gave rise to Panem] in the Gulf of Mexico and moved the Yucatan Peninsula, rather than sinking it"), but other than that, most of the details are taken straight from the book: the list of known-knowns includes the fact that "the capital is Denver," District 12 is Appalachia, and ravaged District 13 (which appears to have taken over most of New Jersey) is "north of West Virginia" and "both visible and reachable from District 12 by foot."
via: msn
Posted by News Hump at 07:40