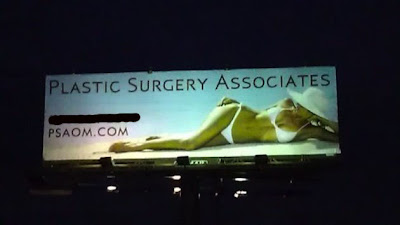 Doctors dump racy ad after fans object, Busty billboard aimed at Auburn fans gets the boot, Plastic surgeons switch to this billboard after some Auburn sports fans decry the original. Last month, Plastic Surgery Associates of Montgomery made headlines after putting up a billboard telling women to show their "Tiger Pride" by augmenting their breast size.
The billboard featured an up-close look at mannequin breasts in a tiger print bra.
While the billboard, which made its appearance on I-85, turned a lot of heads — mostly male heads — it also gained a lot of criticism, especially from Auburn fans, who thought (and rightfully so) the billboard was aimed at them.
Well, in a not-so-surprising turn of events, the salacious billboard is gone. I know, sad tiger. Plastic Surgery Associates of Montgomery still owns the space, but now has a billboard with its name, phone number and a bikini clad girl. It's a lot less offensive, you know, because the bikini isn't in tiger print.
So from now on, cup size will no longer measure women's dedication to Auburn.
via: yahoo
Posted by News Hump at 21:43