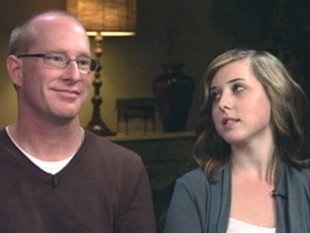 Teacher's shocking affair with student, Teacher Leaves Wife, Kids for High School Student, James Hooker, 41, left his wife to move in with his daughter's 18-year-old classmate. Last year, Jordan Powers was just another student from Mr. Hooker's class. Now she's his live-in girlfriend. James Hooker -- the 41-year-old married father who left his wife and kids for his 18-year-old-student -- might be the worst teacher ever. Last week, he resigned from his job at Enochs High School in Modesto, California over the scandal that's shaken up a community and pit one mom on a crusade to save her daughter from a man she calls a "master manipulator."
Jordan met her teacher as a freshman, but both maintain nothing physical happened until she turned 18 this past September. Hooker claims he saw Powers as "just a student" and had no romantic feelings toward her at first, but when her most recent birthday came around, things changed.
They changed so much, in fact, that Hooker, left his wife and three kids (one of them a 17-year-old Enochs high school student as well) so that he could move in with Jordan.
If this all sounds suspicious to you, imagine how Tammie Powers, Jordan's mom, feels. She's launched an official police investigation to find out if Hooker's relationship with her daughter began before Jordan was of legal age. Tammie is convinced it did, citing a photo of her daughter on Hooker's lap and text messages, emails and phone records exchanged between the couple that predate her daughter's 18th birthday.
"That's pursuit, in my opinion, with some type of intent," she told ABC News 10 in California.
Hooker denies Tammie's claims and is confident the investigation will turn up nothing. He blames the "stigma of the teacher-student relationship" for the public backlash. But Hooker's former boss, Modesto City Schools Supt. Pam Able, doesn't agree.
Even if their relationship doesn't break any laws, Able says she "considers student-teacher dating relationships to be not only unprofessional, but immoral." She also added in an email to the Modesto Bee, that Hooker's relationship has become a "source of great concern for staff, students and parents."
It must be particularly hard for Hooker's 17 year old daughter, now that her father has left to be with a fellow classmate and become a notorious figure throughout the school.
Still, Hooker claims he has no regrets. In an interview with Good Morning America, he shut down Tammie's accusations as a "pack of lies" and said of his new love, "we really do want to have a future together."
Jordan, a quiet, fragile-seeming young woman, who looks closer to 15 than 18 years in age, gazed up at her former teacher, a man that looks every bit his 41 years, and said, "He's more than just a lover."
Jordan has now stopped going to classes and is finishing out her senior year by doing an independent study. She has limited contact with her mom, now that she's living with her teacher, mom's worst nightmare.
Desperate for her child, Tammie has turned her own Facebook page into a "most wanted" profile for Hooker. She's plastered his photo all over her wall warning neighbors about the man she calls an "arrogant pig". She's also made her wallpaper a photo of a prison cell, sending a message to Hooker should he dare visit her site.
Since the story has been picked up by national press, she's been flooded with messages of support from strangers. Tonight, she'll be taking her crusade against Hooker to Nancy Grace. "Nancy's always been a victims advocate and fights for justice," Tammie wrote on Facebook. "That's the goal here, justice."
via: yahoo
Posted by News Hump at 21:34