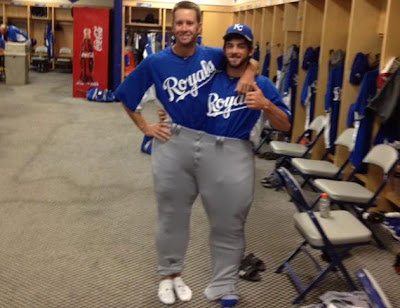 Ballplayers' hilarious fashion statement, Two men, one pair of pants: Everett Teaford and Tim Collins borrow Jonathan Broxton’s britches, You'll probably never guess what these two Kansas City Royals players are wearing for pants. Major League Baseball sent its new social media policy to the Stew inbox on Wednesday. I skimmed through it, so I must have missed the most-excellent part where it encouraged two smaller pitchers to wiggle their way into the pants of a much larger teammate before sending the picture into a world about to double over in laughter.
For the record, that's Everett Teaford (listed at 5-foot-11, 155 pounds) and Tim Collins (5-7, 170) wearing the pants of new Kansas City Royals reliever Jonathan Broxton (6-4, 300). The clubhouse mischief took place on Thursday morning in Surprise, signaling the official start of everyone going stir crazy at spring training.
At least I hope it was just mischief. Because if the Royals are trying to take over the league by creating a super pitcher that can handle twice the workload, it's a terrible idea to go with two lefties.
via: yahoo
Posted by News Hump at 10:05