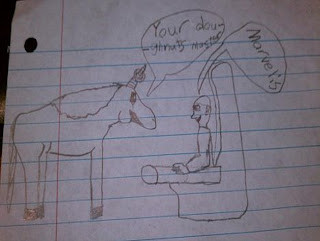 'Bacon tuxedo' letter delights the Web, Child’s ‘more awesome than a monkey in a tuxedo’ letter goes viral, A student thanks his weatherman for being "more awesome than a monkey wearing a tuxedo." A letter from a 4th grade student in Austin, Texas to a local meteorologist has gone viral after the child promised to bring his favorite weatherman doughnuts served on the horn of a unicorn.
"Thank you again for teaching us about meteorology, you're more awesome than a monkey wearing a tuxedo made out [of] bacon riding a cyborg unicorn with a lightsaber for the horn on the tip of a space shuttle closing in on Mars while ingulfed [sic] in flames," reads the letter from the boy identified only as "Flint."
And as fantastical as Flint's language may sound, you actually can pick up a bacon tuxedo, if that's your thing.
KVUE meteorologist Albert Ramon posted a picture of the letter to his Facebook page on Monday and the story quickly began to make its way around social media circles.
After disbelieving readers reached out to Ramon, he posted several updated to his Twitter account, insisting the letter is real. "He is definitely real, a 4th grader. I'm blown away how fast this has gone viral. I got the letter this week," Ramon wrote in one of his Twitter replies.
Anyone questioning the authenticity of Flint's letter should be forewarned; he plans to become "supreme Ultra-Lord of the universe" some day. More from his letter:
"I will not make you a slave, you will live in my 200 story [sic] castle where unicorn servants will feed you doughnuts off their horns," Flint wrote. "I will personally make you a throne that is half platinum and half solid gold and jewel encrested [sic]."
Flint added: "And in case you didn't know that's pretty dang sweet."
Along with the letter, Flint included a drawing of said unicorn delivering a doughnut to his new "master," Ramon. The cute image wouldn't be out of place in the film Napoleon Dynamite.
"His obviously stood out," Ramon added to his Twitter feed.
via: yahoo
Posted by News Hump at 12:19