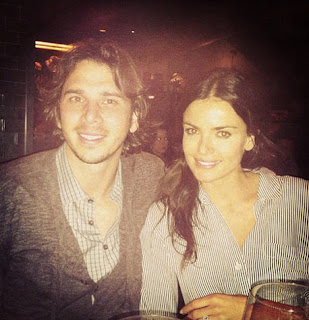 Troubled 'Bachelor' couple's public debut, Fiances Ben Flajnik and Courtney Robertson Make Their Public Debut, Ben Flajnik and Courtney Robertson step out for the first time together amid breakup rumors. A week after The Bachelor's Ben Flajnik made it known that Courtney Robertson is the one for him, the pair has finally taken their romance public. And despite the rocky terms of their relationship, the couple was all smiles in an Instagram photo Flajnik shared on Saturday.
"1st pic out in public," the San Francisco winemaker posted under the pic.
A witness who saw the pair out and about tells Us Weekly, "Saw Ben and Courtney dining with two other guests in the North Beach neighborhood of San Francisco. She was wearing her ring and they looked cozy."
During Monday's Bachelor finale, Robertson beat out Lindzi Cox for the final rose.
"I want to tell you that you are my forever," Flajnik said during his heartfelt proposal. "I have waited a really long time to tell you that I am in love with you more than you will ever know and this whole experience and journey has been worth it every step of the way."
But things between the two aren't exactly a picture-perfect fairytale right now.
According to an insider, during the After the Final Rose episode, Robertson tearfully revealed that Flajnik abruptly dumped her three months after his proposal (which was shot in November), then reconciled with her just as Us Weekly caught him stepping out with three ladies.
Flajnik then swore on his father's grave that he was just kissing "old friends," but insiders say he only met the women in February and is still texting one of them.
However, Flajnik now insists that he wants to make the romance work: "In the last couple of weeks we've been able to talk."
via: yahoo
Posted by News Hump at 13:37