Stacey Solomon axed from 'Celeb Mum of the Year'

Stacey Solomon axed from 'Celeb Mum of the Year' 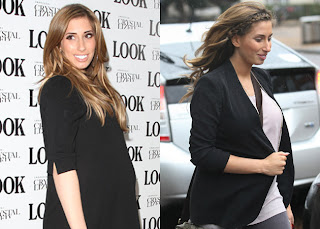 Stacey Solomon axed from 'Celeb Mum of the Year', Stacey Solomon dropped from ‘Celebrity Mum of the Year’ following smoking scandal, TV presenter Stacey Solomon admits she feels terrible for smoking while being seven months pregnant. Stacey Solomon was snapped smoking cigarettes this weekend - just two months before she is due to give birth.
And while she's suffered a backlash of criticism from the press and public, the act has also tarnished her rosy image - she's just been dropped from Foxy bingo's 'Celebrity Mum of the Year' competition.
The news must no doubt come as a double blow for the former X Factor star, as she won the award last year.
Before being axed from the 2012 shortlist, Stacey was up against the likes of Victoria Beckham, Amanda Holden and controversially Natasha Giggs.
A statement from the signer's team said: "Stacey has apologised and is sorry and embarrassed by her actions.
"We understand Stacey is doing everything she can to stop smoking and in recent times has cut back dramatically.
"She's naturally disappointed but accepts the decision."
Earlier today, Stacey said some of the criticism she's received has been 'a little bit harsh'.
On Loose Women the singer-turned-presenter spoke on the phone saying:
"There's ups and downs to people being critical because it makes you think oh my God, I really must sort this out.
"And you feel even more guilty than you already do because, don't get me wrong, I felt guilty before all of this came out.
"But there is a little a bit of you that thinks 'I love my children with all my heart' so some of the comments are a little bit harsh."
Despite being hurt by the comments, Stacey, who is seven months pregnant, believes it's what she deserves.
She added: "All of the responses are something that I deserve. I don't for one minute think I can sit here and say it is ok.
"So I can accept that kind of criticism and although it's not nice to hear I know that its true [the health risks] and maybe that will give me more power to stop it and nip it in the bud.
"I really have been and am in the process of [giving up] before these pictures came out.
"It's a horrible habit and I care more about my children than anything in the whole wide world so anything I can do to give up means more to me than anything else or what anyone thinks."
Stacey is clearly feeling pretty low about the whole affair, and opened up about the personal turmoil she's in...
"It's absolutely devastating not just because I saw them [pictures] in the paper — it's something I'm not proud of and I'm really, really struggling with in general," she said.
"It's not just because everyone knows now. It's something that I don't want to do and that I'm not happy doing so, it's horrible."
via: yahoo
Posted by News Hump at 11:22