Snooki opens up about pregnancy

Snooki opens up about pregnancy 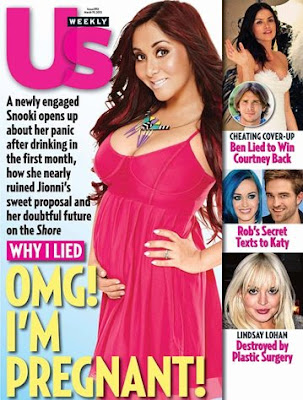 Snooki opens up about pregnancy, Snooki: Yes, I'm Pregnant and Engaged!, The "Jersey Shore" star finally confirms she's expecting (and engaged) and reveals a big fear. Time to fist-pump for a little guido or guidette-to-be, After weeks of rumors, Nicole "Snooki" Polizzi confirms exclusively in the new Us Weekly that she is 15 weeks pregnant -- and engaged to the father, beau of one and a half years Jionni LaValle.
And the Jersey Shore star and LaValle, both 24, know just what detractors are thinking, they tell Us.
"I have different priorities now," reformed party girl Snooki says. "I don't care what anybody else thinks. As long as I know I'm ready and he's ready."
Adds LaValle: "We are not going to screw this up."
The once pouf-haired star and LaValle discovered the news "right after New Year's," she said. Snooki's first thought? "'S--t, I've been drinking!' I was worried. It was New Year's Eve and we were in Vegas, so I did go crazy." she admits.
via: yahoo
Posted by News Hump at 06:22