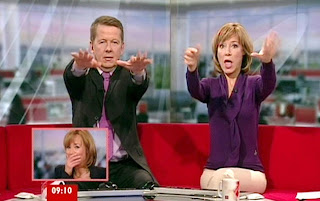 Sian and Bill's Shake ritual, Sian and Bill's secret off-camera ritual, Sian Williams reveals embarrassing 'shake' ritual on final show, As Sian Williams said farewell to 'BBC Breakfast', producers revealed her odd morning ritual. Sian Williams has hosted her final ‘BBC Breakfast’ show after a dispute over the programme's relocation to Salford and revealed an embarrassing secret ritual. On her final show, which aired this morning, a red-faced Williams was shocked when producers revealed an embarrassing show ritual.
It appears that for the last 11 years Sian Williams and Bill Turnbull shake out their arms in front of them in an odd jerky motion 15 seconds before going on air.
Afterwards, a giggling Williams said: "They must think we're mad."
She added: "We've been doing it for years and years and now you know."
As planned, there were no on-screen tears from the presenter after she vowed not to cry on her final show.
She payed tribute to her co-host Bill Turnbull, saying: “We've been friends for 20 years and you've still been my closest friend.”
Williams went on to thank viewers at home with an emotional send-off, adding: “Thank you to the viewers for being loyal and passionate and caring about the programme and I've had two babies on this sofa - not literally, you know what I mean.
“You've been such a wonderful audience, thank you very, very much, I will miss you hugely.”
A firm favourite of morning viewers, Williams first appeared on the show in 2001 along with co-presenter Bill Turnbull.
Although Turnbull has agreed to move up north, Williams would not uproot her family preferring to stay in London present the Olympic coverage and work on a revamped ‘Saturday Live’ show on Radio 4 instead.
via: yahoo
Posted by News Hump at 13:27