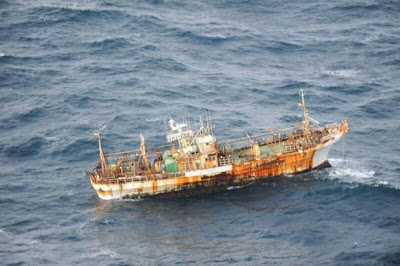 'Ghost ship' marks arrival of tsunami debris, 'Ghost ship' off Canada heralds arrival of tsunami debris, An empty Japanese vessel off Canada's coast suggests the wreckage is moving faster than expected. An empty Japanese fishing boat drifting off the coast of western Canada could be the first wave of 1.5 million tons of debris heading toward North America from Japan's tsunami last March.
The wreckage from flattened Japanese coastal towns - including refrigerators, washing machines, televisions, roofs and fishing nets - is heading inexorably east across the Pacific and could arrive sooner than expected, according to the U.S. National Oceanic and Atmospheric Administration.
"The early indication is that things sitting higher up on the water could potentially move across the Pacific Ocean quicker than we had originally thought," said Nancy Wallace, director of NOAA's Marine Debris Program, which had forecast the appearance of tsunami debris on North American shores only in 2013.
"Those higher-wind, quicker moving items may actually be onshore much sooner - pretty much now."
On March 20, Canada's transport department spotted what it said was an empty Japanese fishing vessel 150 nautical miles south of the Queen Charlotte Islands, adjacent to the main coast of British Columbia.
The ship has been declared a hazard to shipping, but Canada has not said what - if anything - it will do with it. The country's Coast Guard said it will take action only if fuel spills from the ship, which is not likely.
The so-called ghost ship is the first major piece of evidence that Japanese tsunami debris is heading to the United States.
"It does confirm that debris generated by the tsunami will make landfall on the west coast of North America," said Nicholas Mallos, a conservation biologist and marine debris specialist at the independent Ocean Conservancy, which monitors the problem of Ocean trash.
"However, what the quantity of that debris is, what it looks like, all of those questions are still largely unanswered."
The NOAA, which is part of the U.S. Department of Commerce, initially expected to find debris hitting the northern Hawaiian islands this winter and moving slowly onto Alaska, Canada and the U.S. West Coast next year. But those forecasts, made shortly after the tsunami on limited historical current and wind models, are proving inaccurate.
The agency is finding that debris is moving north of Hawaii's northernmost points, and making its way to the continent ahead of schedule, said Wallace. It is now tweaking its forecast to account for new material, such as analysis of recent oil spills and how wind will affect some objects more than others.
"Right now, we are trying to get that methodology of the new models validated by peer review experts," she said.
WALL OF WATER
A magnitude 9.0 earthquake off Japan's northeast coast on March 11, 2011, triggered a 75-foot (23-metre) wall of water that flattened waterfront towns, killing 16,000. Three thousand people are still unaccounted for.
U.S. authorities were immediately aware that the clockwise circulation of the Pacific's northern waters would deliver some remnants of that destruction.
But the extent and composition of the debris is unclear. For about a month after the tsunami, a ‘debris field' was visible by satellite. But it has since been dispersed, making it impossible to track except from vessels.
The Japanese government has estimated that debris from the coastal prefectures of Iwate, Miyagi, and Fukushima totaled 5 million tons. Of that, it says, 70 percent would have sunk quickly onto the coastal seabed of Japan, but the other 30 percent, or 1.5 million tons, would have floated. It is impossible to say how much of that will break up and sink en route and how much will end up on American beaches.
"What oceanographers are estimating right now is that the debris is dispersed over an area of 2,000 miles by 1,000 miles, roughly the size of the state of California," said Mallos at Ocean Conservancy.
"Within that area there is large variability in terms of how dispersed the debris is. It's certainly not a solid floating mass the size of California."
Mallos is set to embark on a one-month voyage from Tokyo to the Hawaiian island of Maui on June 1 to follow the projected path of the debris and finds out more about it.
One of the difficulties is how to distinguish tsunami debris from regular ocean trash, which is a growing issue in its own right.
"Unfortunately debris is a problem every single day," said Wallace. "We're doing baseline monitoring of debris along the West Coast, Hawaii and Alaska, working closely with locals, trying to get a handle on what baseline numbers are so that if there's an upswing in debris we might be able to trace it back to the tsunami."
The NOAA advises people to clear up small pieces of trash - such as plastic bottles - but to report heavy or potentially dangerous items to local authorities.
Wallace said the agency will work with the U.S. State Department and the Japanese diplomatic missions to organize the return of any valuable or sentimental items such as jewelry or photographs, if the need arises.
"What we are saying is, if you see anything let us know. And also if you don't see anything, let us know that too because that's helpful in terms of trying to model and estimate when debris could come ashore," said Wallace.
"Will there be a flotilla of washing machines across the Pacific Ocean? No. Could there be an appliance here and there? Yes, it's a possibility."
via: yahoo
Posted by News Hump at 06:11