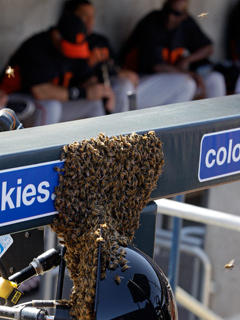 Nasty swarm of bees interrupt MLB game, Bee swarm delays game between D-backs, Giants, A spring training matchup between the Giants and Diamondbacks takes an extremely odd turn. Bees and baseball don’t mix. Sure, the Salt Lake City Bees and Burlington Bees are minor-league teams. But a swarm of bees flying into a stadium during a ballgame will certainly halt the action, sending players scurrying for the dugout and fans from their seats.
Talk about a buzzy story. The Arizona Diamondbacks and San Francisco Giants were in the top of the second inning of an exhibition game Sunday afternoon when the bees arrived en masse, entering the field over the right center-field wall, flying directly over the infield and settling in the Giants’ dugout.
Fire officials were summoned, and it took 41 minutes to clear out the bees and get on with the ballgame. The incident took place in the most deluxe spring-training stadium, Salt River Fields at Talking Stick. The facility opened a year ago and is shared by the Diamondbacks and Colorado Rockies.
The Diamondbacks and Rockies were involved in the last game delayed by bees, before the teams moved to Scottsdale from spring training sites in Tucson, Ariz. In 2005, a game at Tucson Electric Park was delayed 20 minutes. A bee delay also occurred at the same stadium in 2003.
Diamondbacks ace Ian Kennedy was pitching when the bees disrupted play. The Giants had runners on second and third and Freddy Sanchez was at the plate with one out. Rarely has a rally been halted in such a strange fashion.
As the swarm moved slowly over the outfield with most fans unaware of the situation, Diamondbacks center fielder Chris Young began making a, er, beeline for the dugout.
“I heard it before I saw it,” Young said. “It’s not the first time it’s happened, so somehow I knew what was going on.”
First baseman Paul Goldschmidt was confused when he saw Young running off the field. Then he looked to his right and understood. He immediately sought safety.
“I was trying to get away as fast as I could without looking too scared,” Goldschmidt said.
Fans above the Giants’ dugout evacuated their seats, and a message on the scoreboard explained the reason for the delay. Officials say it did not appear that anyone was stung or injured.
“When you have how many millions of bees swarming around, it’s not fun,” Diamondbacks shortstop Willie Bloomquist said. “Get out of the way and let the authorities take over.”
The game resumed 41 minutes later and apparently the Diamondbacks were the more shaken of the two teams: The Giants went on to win 11-1.
via: yahoo
Posted by News Hump at 21:21