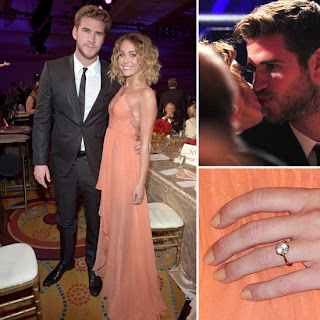 Miley's Cyrus diamond ring brings chatter, Miley Cyrus, Liam Hemsworth Aren't Engaged, Engagement rumors fly after the star steps out with a sparkler, but a source close to her denies the talk. With The Hunger Games garnering rave reviews and grossing a historic $155 million in domestic box office, star Liam Hemsworth and girlfriend Miley Cyrus had plenty to celebrate this weekend. But did the on-and-off couple of three years cap it off with an engagement? Alas, no.
On Saturday, the former Hannah Montana star, 19, stepped out with her Australian beau, 22, at Muhammad Ali's Celebrity Fight Night XIII event in Phoenix, Ariz., wearing a huge new diamond ring on her finger. Despite a flurry of speculation over the weekend, a source close to Cyrus confirms to Us Weekly that the sparkler is not an engagement ring.
Regardless, Cyrus has been wearing and showing off the impressive ring for several days. The singer-actress displayed the dazzler in a Thursday tweet raving about a manicure. "I am soooo obsessed with @jennahipp nail foundations! It looks so chic and classic!" she wrote beneath the pic.
Cyrus and Hemsworth hit it off while filming the 2009 romance The Last Song; despite an August 2010 split, they reconciled less than a year later.
via: yahoo
Posted by News Hump at 07:07