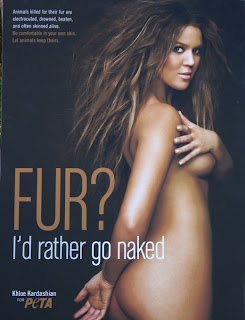 Khloe Kardashian quits on bullying PETA, Angry Khloé K won't support lying, bullying PETA, Khloe Kardashian cut ties with PETA after learning that the animal rights activist who flour-bombed her sister Kim is linked to the organization. Four years after Khloe, 27, stripped down for PETA’s “I’d Rather Go Naked Than Wear Fur” campaign, the reality star called it quits as a supporter, posting the announcement on her website Monday.
“Not only has PETA lied to the public, but they have proved that they support this kind of behavior,” she wrote. “I’ve been a vocal supporter of PETA for a long time but I have also been very vocal about anti-bullying, so this was a huge disappointment for me.”
While PETA has denied any connection to the woman who attacked Kim with flour at a red carpet event last week, TMZ.com identified her Monday as animal rights activist Christina Cho.
Cho, who reportedly yelled, “Fur hag!” when she doused Kim with the powder, was grabbed by security and arrested aftershe tried to flee.
The attack on Kim wouldn’t be Cho’s first anti-fur stunt. In 2010, Cho rushed the stage at a Women’s Conference event in New York, stealing the microphone from designer Donna Karan to rail against the use of fur in fashion.
She also won an award from PETA in 2010 for her activism.
Kim, who initially brushed off the incident, has since said she will press charges against Cho.
via: nydailynews
Posted by News Hump at 08:30