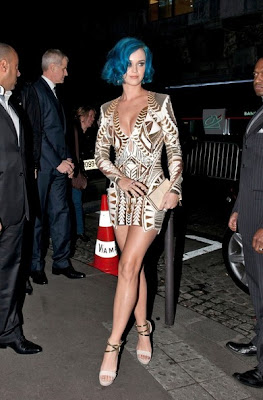 Katy Perry to star in opera biopic, Katy Perry is in line for a role in a biopic of opera singer Paul Potts, playing the 'Britain's Got Talent' winner's wife. Katy Perry is in line for a role in a biopic of opera singer Paul Potts. The 'Frework' hitmaker chatted with Harvey Weinstein at his pre-Oscars party last weekend about the possibility of playing the wife of the performer, who worked as a mobile phone salesman before winning the first series of Simon Cowell's TV talent show 'Britain's Got Talent' in 2007.
Harvey told the New York Post newspaper: "I was talking to Katy about a new project, a possible dramatic role in the Paul Potts movie, which will be shooting in England soon. We'd really like someone like Katy or Adele to play the role of Potts' wife, and Katy seemed genuinely interested."
If she lands the role of Julie-Ann Cooper in 'One Chance' opposite an as-yet unnamed British actor, Katy would have to undergo a transformation to play Paul's curvy spouse and also have to master a British accent.
However, she reportedly told the movie mogul: "I love a challenge."
Former salesman Paul was down on his luck when auditioned for the programme.
Despite his awkward appearance and being visibly nervous, he bowled over the judges - Simon Cowell, Piers Morgan and Amanda Holden - and the show's audience from the first time he opened his mouth to sing.
After being crowned the winner of the series, Paul's' first album - also called 'One Chance' - propelled him into the mainstream, selling over two million copies. He has also since embarked on a world tour.
The singer met Julie-Ann over the internet in 2001.
via: nzcity
Posted by News Hump at 04:13