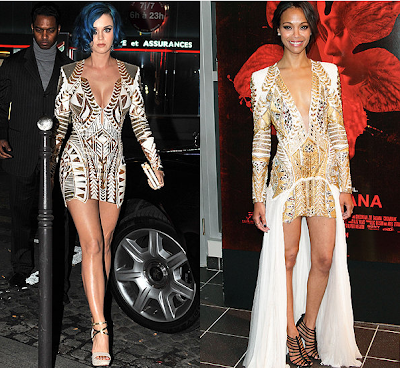 Katy Perry's curve-hugging dress, Katy Perry vs. Zoe Saldana – Fashion Faceoff, The singer is spotted wearing the same revealing mini as a stylish action-movie actress. Pop star Katy Perry and "Avatar" actress Zoe Saldana don't exactly have the same tastes in fashion. Katy prefers out-there ensembles, like the glow-in-the-dark gown she sported at the 2010 Met Gala, while Zoe usually opts for a more sophisticated and lady-like style. Recently, though, their closets collided when the two stepped out in very similar versions of a gold-and-white Balmain Spring 2012 mini dress just seven months apart. Now it's up to us to decide who wore it better!
Katy, 27, wore the dazzling design during a dinner at Paris Fashion Week on March 1. The "Firework" singer paired it with strappy sandals by Christian Louboutin, a cream clutch, and the blue 'do she's rocked since mid-January.
Zoe, 33, donned a slightly different version of the dress with a lower neckline and an elaborate white train while promoting the action movie "Colombiana" last August in Miami. The "Star Trek" star added strappy black heels and loosely pulled back locks.
Before we pick a winner, let's get one thing straight: Katy's hair, while fun, is way too over-the-top when teamed with such a busy dress. Even she didn't seem to like the look much! When asked about it, the "California Gurls" artist said: "It's either Vegas hooker or Balmain. It's the first time I've worn them, and after they read this quote, it might be the last." Yeah, probably so. Fortunately for Katy, her competition also went overboard with eye-catching accessories such as the train and shoes. Zoe simply couldn't make it work. So I'm going to squint my eyes, pretend Katy's hair is back to black, and call her the winner.
via: yahoo
Posted by News Hump at 21:14