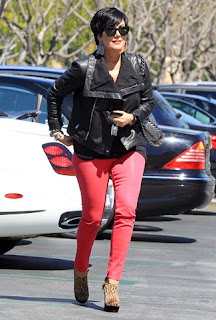 Kardashian mom's age-inappropriate outfit, Kris Jenner's Inappropriate Outfit Copies Daughter Kim Kardashian, Kris Jenner, 56, steps out in clothes that seem better suited for a teenager. Usually, when your mom does embarrassing stuff, you’re the only one who suffers. But in the case of the Kardashians’ mom, Kris Jenner, the world gets to see her cringe-worthy antics.
Most recently, the 56-year-old mother of Kim Kardashian wore an outfit that would be better suited for a 20-year-old (in fact, Kim and sister Khloe have worn similar outfits): hot-pink skinny jeans, black leather jacket, oversized silver handbag, and high-heeled, leopard print mules.
It’s an outfit that a teenager could probably pull off, but Jenner is pushing the fashion bounds in this overly trendy look for her age. The reality TV mom got low marks on the Web. One commenter at the Daily Mail opined the general feeling: “She is a garish attention-seeker. She dresses too young for her age.”
The publicity-hungry mom made waves recently by wearing nothing at all. In “honor” of her son Rob’s 25th birthday, she posted a racy photo of herself when she was pregnant with him. One horrified reader on Yahoo! asked, “What normal person would do that to their son on their birthday? It's one thing to show the picture amongst the family but to post it online for the world. Starving for attention much?!?”
Another added: “Kris, it is not all about you. Why would you post such a private picture on your blog for all to see and why on HIS birthday? No shame whatsoever.”
Not everyone minded it. One gushed: “I think it’s fantastic she posted this… A pregnant woman is beautiful no matter who she is.”
via: yahoo
Posted by News Hump at 22:35