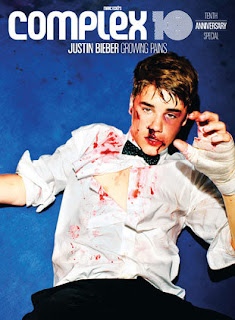 Justin Bieber gets bloody in photo shoot, Justin Bieber’s Complex cover gets bloody, The teen idol is portrayed getting beaten to a pulp in a violent magazine photo shoot. Justin Bieber manned up for the latest issue of Complex magazine by emulating his dad. Two months after critics deemed his V magazine cover effeminate, the 18-year-old "Boyfriend" singer can be seen posing in an extreme new photo shoot, portraying a beaten and bloody boxer for the April issue of Complex.
"u should of seen the other guy," quipped the Canadian pop star on Twitter.
If you think this new look is anti-Bieber, think again; it turns out there's boxing in his blood.
Bieber's dad, Jeremy, is a former MMA fighter, and it just so happens his famous son is a big fan of world champion boxer Floyd Mayweather Jr. The Biebz's love of the sport likely helped inspire him for the Complex photo spread. 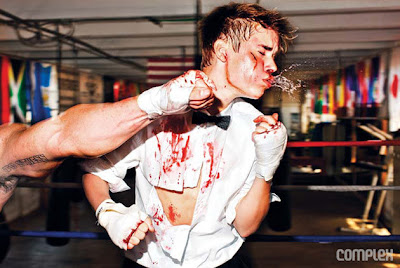 "Every guy has feminine qualities," Bieber told Complex of the controversial V shoot. "You're raised by your mother and father, and I was raised mostly by my mother. I think the pictures turned out good -- so whatever."
Selena Gomez's boy toy is a lot less dismissive about other photographs taken of him, namely the paparazzi shots that steadily keep streaming in. 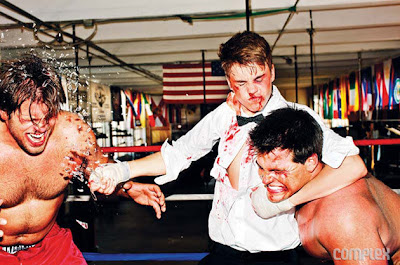 "[It] pisses me off so much when people say, 'Get over it, Justin. You're famous. People are going to take your picture. Suck it up, you're rich,'" he said. "It's like, 'Yo, I just got off an eight-hour flight. I'm tired and my eyes have bags under them. I'm not trying to take pictures. I'm not going to come to your house, wake you up, and start snapping your picture.'"
No, but he might show up with those boxing gloves, so you better watch out!
via: yahoo
Posted by News Hump at 05:56