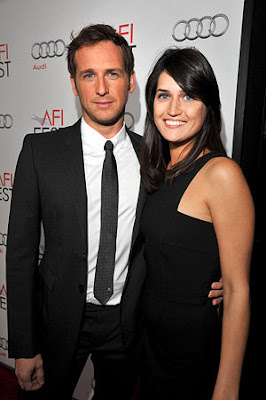 Josh Lucas Marries Mystery Woman, Star marries mystery woman, Actor Josh Lucas marries a beautiful brunette he's been quietly dating for months. Looks like there is a Mrs. Josh Lucas. A rep for the star of "The Firm" confirmed to Us Weekly that the actor has wed his girlfriend. The two were married last Friday. A source confirmed to the magazine that the happy couple are also expecting their first child. So who is the lucky bride?
She has been identified only as a woman named Jessica who is a freelance writer. The actor -- who clearly values keeping his private life low-key -- hasn't revealed much about his bride. But the beautiful brunette was on his arm for the "J. Edgar" premiere in November 2011.
Searches on Yahoo! for the pair surged on word of the wedding: Fans looked up "Josh Lucas married", "Josh Lucas girlfriend", and "Josh Lucas and Jessica".
In January, the never-married Josh revealed his engagement on "The Tonight Show." Lucas told Jay Leno that it was on a Big Sur trip with his girlfriend when an encounter with a wild animal led him to realize he wanted domestic bliss.
The "Sweet Home Alabama" heartthrob recounted, "I see the very slight glint of the eyes of a huge mountain lion. ... I started screaming and yelling and literally being as crazy as I could be. ... It padded off and just slowly went away, and I worked my way into the trailer and I got in and I decided at that moment that this woman was the woman for me." That led Lucas to pop the question.
The "Poseidon" star has been previously linked to A-listers Rachel McAdams and Salma Hayek.
via: yahoo
Posted by News Hump at 13:10