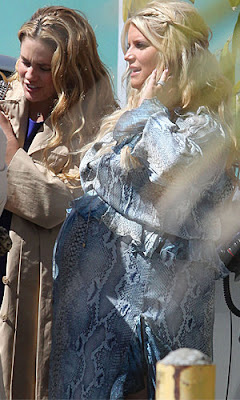 Jessica Simpson's wild baby-shower look, Jessica’s Wild Baby Shower Look, The pregnant star turns heads in a snakeskin-patterned dress over the weekend. With just weeks to go before she gives birth to a daughter, Jessica Simpson was feted by her family and friends on Sunday with a pink-and-yellow-themed baby shower in Los Angeles.
And despite the fact that she's expecting a little girl, the mom-to-be was decked out in a peculiar look: a light blue snakeskin-print dress with lots of ruffles. The clingy frock really accented heavily pregnant Simpson's baby bump and the "Fashion Star" judge accessorized her look with braids in her hair — and a big smile. "Jessica looked pretty and very happy," an eyewitness told People. According to Us Weekly, Simpson "received tons of gifts mostly wrapped in pink gift wrap and boxes. There were several books, stuffed toys and clothes among other items."
The kid-friendly bash — which was organized by celeb party planner Mindy Weiss (who also did Simpson's first wedding to Nick Lachey) — was attended by famous moms Ellen Pompeo, Jessica's younger sister Ashlee Simpson, and pal Jessica Alba, who brought along her 7-month-old daughter Haven. Simpson, 31, was so "ecstatic," says Us, she greeted guests before they even set foot into the party. Men were also allowed at the baby shower. Not only was Simpson's fiance Eric Johnson -- who was also dressed in blue -- in attendance, but so was her former brother-in-law, Pete Wentz, who looked after his and Ashlee's son, 3-year-old Bronx.
Simpson has gushed that her nephew is so looking forward his baby cousin, he has already set aside toys he's outgrown for the little girl, who reportedly will be named Maxwell after Johnson's grandmother. "It really makes your heart melt," Simpson told Elle magazine in the interview which accompanied her nude photo shoot. "Yesterday, he said he was going to teach her how to crawl and then how to walk. 'OK, you can do that, Bronx.' It's so cute."
As Simpson and Johnson get closer to the day they will finally get to meet their daughter, the first-time mom insists she's not scared — even though doctors have estimated the little girl's birth weight to be approximately 10 pounds. "I figure if all these women all around the world can do it, I can do it," she told Elle. "[The baby] is in the 90th percentile of weight right now, so she's a big un. She's going to be a very big baby, but I guess that's what I get for letting a baller knock me up."
via: yahoo
Posted by News Hump at 11:21