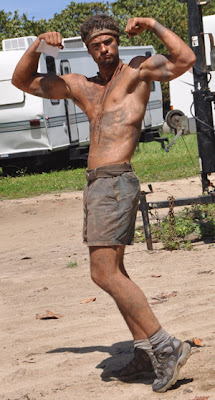 Jean-Claude Van Damme's look-alike son, Photo of Jean-Claude Van Damme’s Musclebound Son Hits the Web, Kris Van Varenberg not only has his dad's muscles, he's acted in movies, too. If those bulging biceps look familiar, it's because Kris Van Varenberg is a look-alike to his famous dad, the musclebound martial artist and actor Jean-Claude Van Damme.
The father and son have teamed up on past movies such as "The Quest" as Young Chris and "Universal Soldier: Regeneration" where he portrayed Miles. And now the 24-year-old and the 51-year-old are filming together once again for the flick "Welcome to the Jungle."
Photos of the pair snapped while filming on location at Mar Chiquita beach in Puerto Rico show the duo tanned and toned. The son of Van Damme certainly has nailed the family look: the legs flexed in a body builder's stance, tattooed arms shown off over his head, mud-spattered, with messy, brown hair that's pushed back with a headband, and shirtless, natch.
No surprise: Van Varenberg is one chip off the old block. He is the son of Van Damme and body builder Gladys Portugues. The first-born took his dad's actual last name, while the "muscles from Brussels" uses a stage name, Van Damme. The up-and-comer has voiced an interest in writing and directing as well as acting, and was credited as a writer in the Van Damme martial arts movie, "The Tower."
Van Varenberg has a younger sister, Bianca Bree, who will also appear in the family film "Welcome to the Jungle," which comes out in 2013. Van Damme will soon be seen promoting his upcoming action/thriller "The Expendables 2."
via: yahoo
Posted by News Hump at 13:29