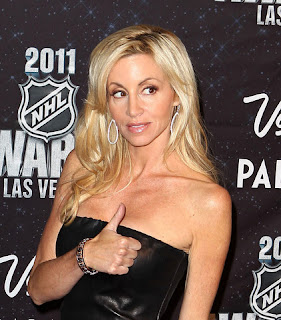 Grammer leaving 'Real Housewives', Camille Grammer: I Didn't Want to Leave Real Housewives of Beverly Hills, Camille Grammer confirms she will no longer be on the show amid conflicting reports about why. Did Camille Grammer leave on her own terms -- or was she pushed out? As a source told Us Weekly Saturday evening, the 43-year-old ex-wife of Kelsey Grammer won't be coming back for season three of Real Housewives of Beverly Hills.
The former dancer and Playboy model confirmed it herself to Us later that night at the Grand Opening of a new Blizz Frozen Yogurt at the MGM Grand in Las Vegas.
"I can't say too much at this moment, but we couldn't get it worked out," the mother of two explained to Us. "I love these girls. I really do," she said of costars Kim and Kyle Richards, Taylor Armstrong, Lisa Vanderpump and Adrienne Maloof. "I've had so much fun with the franchise, but I guess the producers and I couldn't come to an agreement."
Although a Grammer source had said "She just doesn't want to expose her personal life anymore," she claimed the ouster was "mutual," and if she had her way, she'd be back for another round.
"I think I would have done it, definitely."
Her buddies Adrienne Maloof and Kyle Richards were also at Saturday's Blizz event in Vegas -- and they're bummed about her departure.
"It's sad," Maloof told Us. "Together the six of us were a great combo."
Added Kyle Richards, "It's going be sad not having her in the show. It's sad."
One major source of comfort for Grammer in her post-Housewives life is hunky boyfriend of eight months Dimitri Charalambopoulos, who was on her arm at Saturday's party. "Everything is great. We get along really well," gushed Grammer, who famously dealt with Kelsey's affair with Kayte Walsh and subsequent divorce filing on season one of the show. "I care about him very much and we're enjoying each other's company."