Eerie behemoth is caught by accident

Eerie behemoth is caught by accident 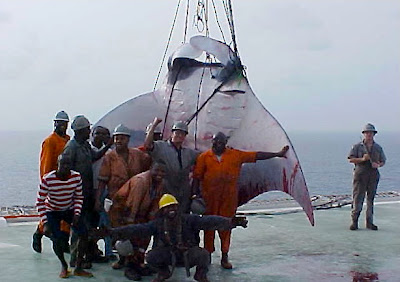 Eerie behemoth is caught by accident, Giant manta raised from the depths off Africa by ship's anchor, Workers aboard an oil company ship off Africa have a rare encounter with a giant manta. There are few details, but images posted this week to a Nairaland website forum starkly illustrate a story about a giant manta being hauled aboard an oil-rig servicing ship after becoming entangled in its anchor line in the South Atlantic.
The unusual catch off Nigeria's Bonny Island involves one of the largest and most docile marine species. Giant mantas, which are found in temperate regions around the planet, can measure nearly 30 feet across and weigh more than a ton. Details of the catch are between the accompanying images and it should be noted that giant mantas, which are plankton eaters, do not possess stinging spines, as mentioned in the description from a forum contributor named Pharrod.
"The stinging Manta ray was killed when the oil rig servicing ship anchored at the middle of ocean near Bonny Island. The anchor of the ship brought the stinging ray up while the ship was about to sail. The stinging Manta ray was killed while resting at the ocean floor.
"But guess what? It was sold to fishermen that was around when it was killed at the amount of five thousand naira only. It could have been preserved. My friend is one of the people on the ship deck."
via: yahoo
Posted by News Hump at 16:49