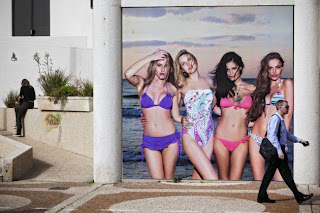 Country bans excessively skinny models, Israel’s skinny model ban: New law requires body mass index of 18.5 or a doctor’s note, Israel's new law requires models to maintain a certain body mass index to be hired. The fashion industry has long debated the use of ultrathin models. Now lawmakers in Israel are attempting to ban them.
A new law passed on Monday requires that male and female models in Israel must have a body mass index (or BMI, a measure of weight proportionate to height) of no less than 18.5—a standard used by the World Health Organization—or a note from a doctor saying they are not underweight before they can be hired for a modeling job. A six-foot-tall model, for example, must weigh no less than 136.5 pounds.
The legislation also bans use of models who "look underweight," and creators of ads must disclose whether they used Photoshop or graphic programs to manipulate images to make the models look skinnier.
Lawmakers are hoping the measure encourages a healthier body image among teens and fights the spread of eating disorders like bulimia and anorexia. According to a study cited by the Associated Press, 2 percent of girls aged 14 to 18 in Israel have eating disorders.
"Beautiful is not underweight," Rachel Adato, one of the lawmakers who voted for the bill, told Reuters. "Beautiful should not be anorexic."
Adi Barkan, a top modeling agent in Israel who helped Adato craft the law, described underweight models favored by the fashion industry a bit more bluntly.
"They look like dead girls," Barkan told the AP.
via: yahoo
Posted by News Hump at 00:26