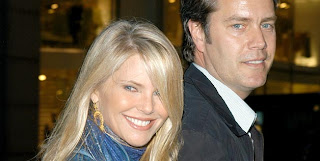 Christie Brinkley wants her ex to pay big for email ‘bullying’, Brinkley wants Cook fined for emails, The bitter battle between Christie Brinkley and ex-husband Peter Cook rages on. The age-defying supermodel wants a judge to fine Cook $140,000 for allegedly sending her abusive emails, reports the New York Daily News.
When Brinkley, 58, divorced Cook, 53, in 2008, their split grew so contentious that the judge reportedly ordered Cook to cough up $5,000 for any communication that "crossed the line." Christie claims he's violated that order 28 times and is demanding $140,000, on top of $32,000 in school fees she says she's owed for their two kids. "This is not about the money," insists her lawyer. "This is about what we're calling bullying." Cook, in turn, wants Brinkley fined $200,000 for the same type of "inflammatory communications."
Posted by News Hump at 10:06