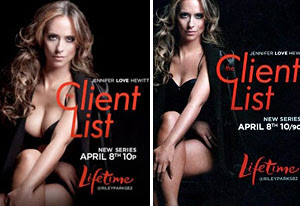 Jennifer Love Hewitt on digital breast reduction, Jennifer Love Hewitt Gets a (Digital) Breast Reduction in The Client List Ads, Jennifer Love Hewitt was surprised to see her cleavage altered on a poster for her new show. Jennifer Love Hewitt has gotten a boob reduction — digitally at least. A new version of an ad for Hewitt's racy Lifetime series The Client List shows the actress with a noticeably less ample cleavage.
In the original ad, Hewitt flaunts her breasts — which she says have served her well — in a low-cut negligee, but the altered version features her with a flatter chest in a higher-cut top.
Hewitt — who plays a struggling housewife who starts working at a massage parlor that offers sex on the show — said on Friday's The Kevin & Bean Show from KROQ that she had no idea a more modest version of the ad had been created.
"Somebody sent me a copy of the photograph, and I was like, 'Ummm, what happened?'" she said. "I'm not quite sure what's going on. But apparently somebody wanted me to have a boob reduction. ... The thing that"s even crazier is that usually when they do that stuff, I had to see the photograph before they went out anywhere, and I never saw a new version of it."
via; yahoo
Posted by News Hump at 15:33