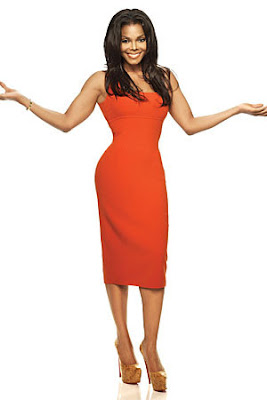 Janet Jackson shows off thin new figure, Janet Jackson Shows Off Her Slimmed Down Body, The singer's transformation is so dramatic, it sparks Web chatter that her image was digitally altered. Janet Jackson has been candid about her lifelong struggle with weight, but — as you can see in this new photo from her Nutrisystem ad campaign — she appears to be winning the battle. The 45-year-old singer, whose weight has yo-yoed up and down during her long career — debuts her much trimmer figure in a curve-hugging orange dress.
In a new commercial for the weight loss company, which debuted yesterday, Jackson shows off her "after" body in form-fitting black pants and a white top, declaring, "This is what success looks like," before launching into details about the Nutrisystem plan, which is based on a low-glycemic diet. Jackson's body has transformed so dramatically in both the commercial and the photo that there's already been Internet chatter from commenters that her image was digitally altered.
Jackson doesn't indicate exactly how many pounds she has shed on the program and previously told USA Today that she doesn't intend to. "I'm not viewing this as a diet," she told the paper. "I'm not putting a number on it. I don't look at the scale. I'm going about it in a different way this time." However, during an appearance on The Tonight Show in January she told Jay Leno that her heaviest weight was 180lbs in 2006. That was the year she famously appeared on the cover of Us Weekly showing off her skinnier body.
In her 2011 book True You, Jackson opened up about being an "emotional eater." She has said she's suffered from an unhealthy body image since she was a girl and it was made worse by her brother, the late Michael Jackson, making fun of her for it. "I was always made to feel like a fat kid by Michael," she told the UK magazine Q. "He'd say, 'This is what your butt should look like' and show me a picture from a magazine. He was such a happy kid, but then when he became a teenager he got issues. That's when he became an introvert and projected all that onto me. He called me brutal names, like 'Fat Butt.' Though he says it was meant affectionately, it really affected me."
via: yahoo
Posted by News Hump at 11:51