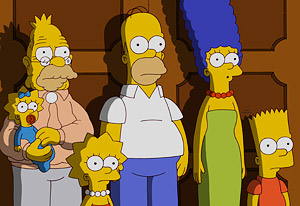 Long-debated 'Simpsons' mystery solved, 'Simpsons' Springfield Location Revealed, Creator Matt Groening reveals the inspiration for naming the characters' town Springfield. “Simpsons” fans got the answer to a long-debated question about the 22-year-old animated TV show starring Homer, Marge, Bart, Lisa and Maggie: Where the heck is Springfield? The “Anytown, USA” city could be in almost any state of the union, from Maine, to Ohio, to Vermont, to Virginia.
But it turns out, the show’s town is named for (drum roll) Springfield, Oregon. Oregon! The creator of the cartoon, Matt Groening, revealed the location in an interview with Smithsonian magazine.
Immediately, the Web exploded, and Matt Groening became a trending topic on Twitter, with comments flying. Eli Braden tweeted, “No wonder we never see them pumping their own gas.” Ubersocial crowed, “Eat my shorts, Illinois!” The Oregonian piled on: “Better luck next time Ohio, Mass., Illinois, Missouri, etc.”
In the interview, the 58-year-old recounted that he had named the town after the TV show “Father Knows Best,” which took place in a town called Springfield. Groening figured it was near where he grew up in Portland, Oregon (which, now that we think about it, was a huge hint).
The "Life in Hell" creator told the magazine, “When I grew up, I realized it was just a fictitious name. I also figured out that Springfield was one of the most common names for a city in the U.S. In anticipation of the success of the show, I thought, ‘This will be cool; everyone will think it’s their Springfield.’ And they do.” Or, they did.
When asked why he never spoke of the real town before, he explained, “I don’t want to ruin it for people, you know? Whenever people say it’s Springfield, Ohio, or Springfield, Massachusetts, or Springfield, wherever, I always go, ‘Yup, that’s right.’" But now we know, it’s not.
via: yahoo
Posted by News Hump at 00:48