Buzz about Brad and Angelina movie

Buzz about Brad and Angelina movie 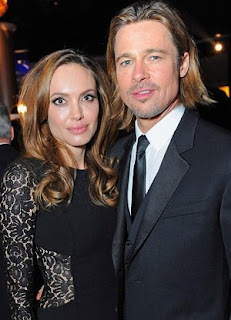 Buzz about Brad and Angelina movie, Brad Pitt, Angelina Jolie may share screen time again, The two are in talks to star in a gritty thriller — their first project since "Mr and Mrs Smith." Brad Pitt is close to signing on to a Ridley Scott film in which Angelina Jolie is also circling, Deadline Hollywood reports. If all lights turn green, this would be the first time the couple has shared screen time since "Mr. & Mrs. Smith"—the 2005 film in which the celebrity pair are said to have first fallen in love (while Pitt was still married to actress Jennifer Aniston).
Pitt and actor Javier Bardem are said to be close to signing on, and Jolie is vying for the female lead, according to the Deadline report.
The thriller, called "The Counselor," stars Hollywood "it" man Michael Fassbender, while Oscar winner Natalie Portman and Jeremy Renner have also been rumored to be in the film. "The Counselor" is about a lawyer (Fassbender) who falls in too deep with drug trafficking.
It starts shooting in June in Europe—a convenient location to Scott's and Jolie-Pitt's respective homes in the south of France.
Jolie has voiced the desire to work again with Pitt. In 2010 this is what she told Vanity Fair:
I'd love to. We've talked about it. We'd have to figure out who's going to watch the kids, but it's really about finding the right thing, because we've looked. When you're a couple, there are certain things people don't want to see you do. It becomes too indulgent, too personal. I don't think people want to see people who are really together intimate on-screen. Maybe we have to play bad guys that try to kill each other, so it's just fun and aggressive, not dealing with some man-woman deal.
"The Counselor" will be Scott's next directorial effort after "Prometheus," also starring Fassbender (alongside Charlize Theron), due out in theaters June 8.
via: yahoo
Posted by News Hump at 23:58