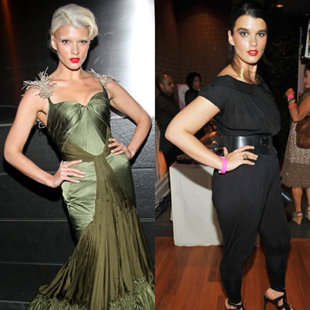 Famous Plus-Sized Crystal Renn Model Slims Down, Former Plus-sized Model Crystal Renn a Shadow of Her Former Self, Crystal Renn, who built her name as a curvy catwalker, defends her decision to get thin. Crystal Renn has reinvented herself several times as a model. In the past, the 5-foot-9 brunette beauty went from a 95-pound 16-year-old anorexic to a successful size 14 plus-sized model.
Now she appears to be returning to her thin frame.
The 25-year-old looked almost unrecognizable Tuesday night at a charitable event in New York City, appearing very thin with short, platinum blonde hair and eyebrows.
"I've been a double-zero, children's clothes, at 95 pounds, and I've been all the way up to a size 16 and everything in between," Renn said to the United Kingdom's Daily Mail. "Now I'm a 6, 8, sometimes a 10, depending on what designer I'm wearing. And that's an interesting place to be in fashion, where extremes are the norm."
Her career has certainly been one of extremes.
But her latest altered appearance is causing some controversy, since Renn has been a vocal advocate against overly skinny models. The curvaceous beauty who caused a sensation on runways all over the world became the face of that cause after chronicling her struggle with anorexia in her 2009 memoir "Hungry: A Young Model's Story of Appetite, Ambition, and the Ultimate Embrace of Curves."
When the book was published, she told the New York Times that "she felt that she was able to close the door on a period of her life defined by hatred of her body."
And her career took off. Her agent, Gary Dakin, told the New York Times that Renn was "far and away" the most successful plus-sized model at Ford Models. She modeled for stores such as Bloomingdale's, Saks Fifth Avenue, and Evans, a plus-sized retailer in the U.K.
Weighing about 165 pounds at the time, she made a yearly salary in the high six figures.
Then Renn started losing weight about a year ago.
"When this whole weight-loss thing happened, I think that a lot of people wanted to point their finger at somebody," Renn said in an interview posted on the Ford blog. "They wanted to find a conspiracy where there absolutely was none."
Renn is now regarded as a former plus-sized model by People magazine, which wrote about her landing a coveted spot in the Sports Illustrated swimsuit issue this year.
"I felt comfortable with my body. I've been doing yoga for a while now," Renn told People. "That makes you aware of how your body moves.
"I have found a place of stability when it comes to how to view my figure."
But she didn't always feel like that.
After being scouted in her hometown of Clinton, Mississippi, at the age of 12, Renn was told she could make it as a model if she lost weight. She did just that, and when she moved to New York three years later, "she weighed 95 pounds and had lost more than 42 percent of her body weight," according to the New York Times. She also got plenty of modeling jobs.
But the cost of her early success was anorexia, which she struggled with for years. Her agent told her she had to either live with the difficulty of being so thin or become a plus-sized model. After turning 18, Renn opted for the latter, and began the second part of her modeling career, "fluctuating between a size 10 and a size 14," according to an ABC News report.
Now, Renn "is in between the two" sides of the modeling industry -- plus-size and otherwise, said her agent, Dakin, to ABCNews.com.
"She reintroduced exercise back into her life," Dakin said to to ABC News. "Hiking and yoga are part of her life now. She is healthy and feels amazing right now."
via: yahoo
Posted by News Hump at 23:16