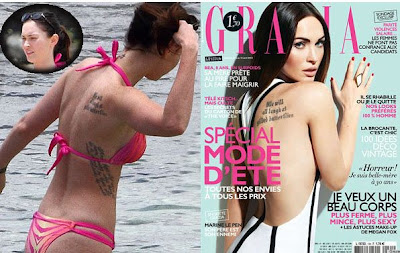 Megan Fox's Disappearing Body Art, Megan Fox’s Tattoo Gets Airbrushed Off Grazia Magazine Cover, The star appears on a magazine cover, but one of her infamous rib-cage tattoos isn't there. Megan Fox has been very open about the fact that she's removing a tattoo of Marilyn Monroe's face from her forearm, but in her cover photo for the May issue of Grazia magazine's French edition, another one has vanished: a Frederich Nietzsche quote on her right side. Has the "Transformers" actress lasered off yet another tat?
Not exactly. The same photo appears on the inside of the magazine — and the ink, which reads, "And those who were seen dancing were thought to be insane by those who could not hear the music," has magically reappeared on her rib cage. Maybe the editors found it too distracting and decided to Photoshop it out? Strangely, the magazine did not digitally remove the equally obnoxious tattoo she has just above the Nietzsche quote, a line from Shakespeare's "King Lear."
The tattoo in question, one of a reported eight that 25-year-old Fox has also over her body, was somewhat inspired by Mickey Rourke, her co-star in the romantic drama "Passion Play." In June 2010, the actress told MTV News, "I actually got a tattoo that is sort of in honor of him. It's on my ribs. I don't know if it's been photographed yet, but it'll come out eventually, I'm sure.
I just love him very much and think he's very special." In a follow-up interview a few months later, she explained the ink "is a Nietzsche quote that sort of basically is about marching to the beat of your own drummer and not being afraid to do that. I was saying that it reminds me of Mickey, of course, because he clearly is not marching to anyone else's drummer, drumbeat, and that's all. It's not necessarily an homage to him."
In addition to her tattoos in honor of Rourke, Shakespeare, and Monroe, Fox also has one for her husband, Brian Austin Green. His name is right above her bikini line.
If they split, we're not sure what would be more painful — the breakup or lasering that one off too.
via: yahoo
Posted by News Hump at 23:28